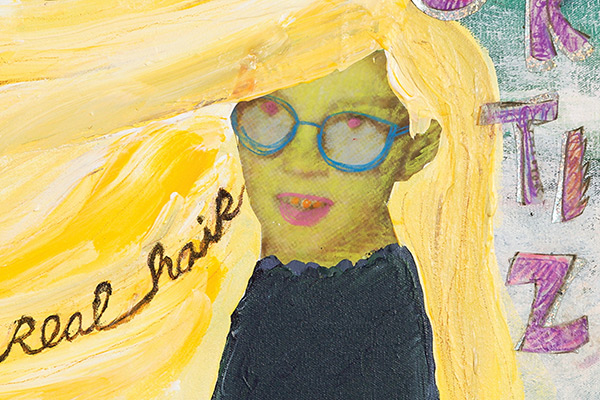 On Real Hair, the follow-up EP to their excellent 2013 LP Major Arcana, Speedy Ortiz once again prove that they’re not just rehashing ‘90s indie rock, but taking all the irony, angular guitar lines and fuzz that characterised that decade, and making it their own. Yes, they sound like Pavement, Slint and Dinosaur Jr, but they’re more than just a faded copy of what was. Rather than making you wish you were in ‘92 hearing Slanted and Enchanted for the first time, Speedy Ortiz make you glad to be around in 2014 and show that there’s still plenty of room to innovate in indie rock.

Speedy opens this EP with their most poppy and immediate track to date. They’re a band that usually makes you work for the hooks and melody buried within layers of grunt and dissonance, but on “American Horror” it’s just infectious guitars, big choruses, and the classic quiet-loud dynamic perfected by Pixies 25 years ago and utilised by pretty much every indie rock band since. However, the angularity returns on “Oxygal,” with both the lead guitar line and front-woman Sadie Dupuis’ wiry voice bouncing around, matching up occasionally and ultimately harmonising beautifully in the chorus as she wistfully asks for a camera-shy fleeting lover to be in a picture with her; to prove it was real. The Pavement influence shines through on “Everything’s Bigger,” with an intro that wouldn’t be out of place on Crooked Rain, Crooked Rain and borrowing a little melody from possibly the most Speedy Ortiz-esque Pavement track, “Platform Blues.” The closing song, “Shine Theory,” serves a similar purpose to “No Below” on their last album, showing that Speedy can do beautiful and heartfelt just as well as heavy and biting. It’s the slowest and gentlest track on the record, with touches of acoustic guitar in the intro and a sweet melody that helps to blunt Dupuis’ naturally sharp tongue.

For all they owe to the indie rock canon, Speedy Ortiz have managed to craft a sound that is undeniably their own. There are few guitar bands around today that can claim that – Parquet Courts are another exception. What separates Speedy from their blander contemporaries is the level of personality Dupuis puts into her songs and an apparent refusal to become a caricature of her influences. More reinvention than revival, this band is doing to ‘90s indie rock what Tame Impala have done to ‘60s psychedelia, bringing it into the present on their own terms and creating music that could only exist today.
This article first appeared in Issue 4, 2014.
Posted 2:59pm Sunday 16th March 2014 by Peter McCall.