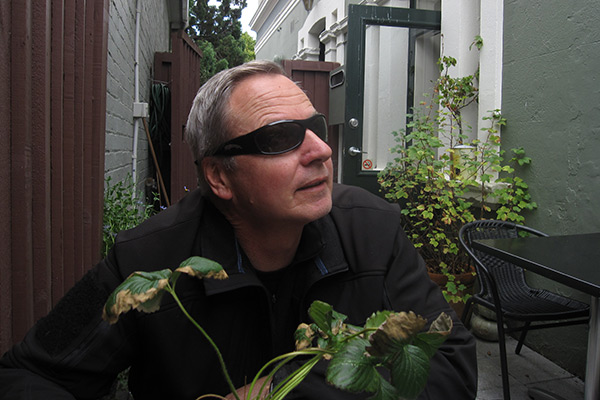 The Dunedin music scene is currently undergoing quite a resurgence; at the forefront of that is Ian Henderson. Owner of Fishrider Records, he has over the past few years released a slew of local talent, helping Dunedin music find a more international audience. Ian talks to Adrian Ng about the Dunedin music scene, his exciting new compilation, and the Fishrider Sound.

Tell us about Fishrider; what do you feel has made it as recognised as it is today?
Is it recognised? I’m not sure. It had a really good piece of luck in 2012 when an album by Opposite Sex attracted some attention overseas. Up until that point the label was really just The Puddle albums and a means to an end to release my brother’s music. It wasn’t taken seriously as a label. Not even by me. But releasing Opposite Sex made me realise that it was much more exciting and satisfying to release new music by unknown young artists that no-one else would ever release, and find an audience for them.

The reputation of Dunedin for this type of music has grown over the years as more people discover music from the past and realise wonderful music is still being made here. People overseas romanticise Dunedin and its music.

You’ve gathered some tracks for an upcoming project you’ve got lined up. Are you willing to share a bit of knowledge on this compilation you’ve got in the works?
Fishrider will be releasing a compilation LP and magazine called Temporary – Selections from Dunedin’s Pop Underground 2011 – 2014 about June, I hope. It will be our 13th release so FISH013 will be 13 bands and 13 songs. Some of it is new, some unreleased and unheard. It is a very cool collection of music by some of my favourite people.

It is a very personal selection of songs by the young bands I love the most. It was pretty easy to choose because I just made a list of all the bands I had seen multiple times. It is not meant to be representative of “Dunedin music” – it is just my personal fantasy “Pop Underground” scene.

I’ve had the idea of a compilation for a while but Loulou Callister-Baker gave me the inspiration to turn the idea into reality. She interviewed me last year for a Critic article on nostalgia in relation to music. Loulou was looking at music from the perspective of a 20-year-old, experiencing being part of something in Dunedin involving music made by a wide group of people she knew which she thought was special. She was experiencing being part of a music scene for the first time and realising these were memories of people, places and sounds she would carry with her throughout life.

I can look back on a few decades where my experiences were in part defined by music and music scenes both here and also overseas. But I also worry about how coherently things are documented in a digital era. So that leaving a record - quite literally - was part of it. The Temporary title reflects the transient nature of music and young musicians here. Dunedin is a place people leave or pass through, so sometimes bands and scenes here can be quite fleeting – which can be frustrating when you love them!

But the main driver from a practical business perspective was I realised that the little bit of international profile the label had meant a compilation might be viable and a good way to promote a wider range of bands and their music. All the bands I would happily release on Fishrider if that was practical, so the compilation is a good way to share a bit more of the kind of Dunedin music I love with the world. I have the networks to sell it in the UK & Europe and in the US and there is an interest in what we are doing here, so why not? These kinds of compilations were how I discovered a lot of great music – compilations based on a label, a region, a scene.

What was your initial perception of the Dunedin music scene and how does it compare to the scene of present?
I came back to Invercargill from a few years living in the UK in the early 1980s with a collection of UK post-punk music. A friend raved about this great new band and played me something by The Clean off their first EP. I said “that’s rubbish.” In my defence, it was played on a crappy little tape recorder. But it didn’t take me long to fall in love with The Clean. Within a few years I was harassing the local newspaper to cover local music in their Saturday music page and they said “why don’t you do it?” I have never really stopped telling people what I think they should be listening to and why.

I visited Dunedin as much as I could and I saw some great gigs here and when bands came to Invercargill, but I didn’t experience very much of the scene in the ‘80s apart from that and through my brother. By the time I had moved here in 1996 the Flying Nun and Xpressway era “scene” had all but gone. There was another “scene” around Arc cafe and its Arclife label for several years from the late 1990s. There has always been great music made here. What comes and goes are the focus points for a scene – creative communities like The Attic is today, venues, organisers and promoters, record labels.

I think the scene today is as good and vibrant as it ever was. I see people making music now for the same reasons as they did in previous eras. There is still the lack of ambition and that “nothing to lose/ nothing to gain” mindset Shayne Carter said was the strength of alternative music made here. I still love how musicians I see here just do their own thing and don’t really care about “making it.” There’s a kind of honesty and freshness that comes with making music for yourself and your friends.

What are the elements you look for in an artist? What makes you think “Oh, I want to release this?”
First thing is I have to really love the music and want to play it all the time and need to have that record in my collection. That passion for the music is the most important. Second most important thing is I have to know and like and respect the people. Life’s too short to work with difficult, unrealistic people, particularly when you are doing it for love – putting hours of time and effort and money into those people just for the reward of releasing their music.

Is there such a thing as the “Fishrider sound?”
All the bands on the label are selected on my taste and all fit a very loose “underground pop” aesthetic, so who knows? I think there was a 4AD sound and a Postcard Records sound and, early on, a Creation Records sound, so I think it is a good thing for a label to have a musical identity.
This article first appeared in Issue 4, 2014.
Posted 2:59pm Sunday 16th March 2014 by Adrian Ng.