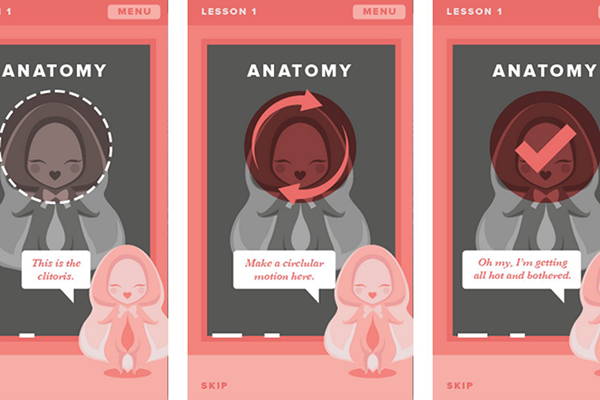 I’m just not sure that HappyPlayTime’s approach is the best way to go about it. The app’s first “lesson” points the user toward the clitoris and suggests that they rub it in a circular motion until a pink tick appears, indicating orgasm. That’s the crux of it, I suppose. I’d be interested to see what the other lessons involve.

What I do take issue with is the design. Far from sexy, mature, or arousing, the app’s mascot is a dancing illustration of a vulva that looks disturbingly like a baby. This, combined with the overwhelming baby pink colour scheme, seems condescending and (worse) infantilising. Women who are trying to learn about their bodies need mature and realistic help – they don’t need to be babied.

My suggestion? Scrap the design, but keep the concept. Come up with something sexier, and next time, don’t make your mascot look like a baby.

NOTE: THIS WEBSITE IS BLOCKED ON THE OTAGO UNI NETWORK - CRITIC CONTACTED OTAGO UNI INFORMATION TECHNOLOGY SERVICES, WHO CONFIRMED THAT THEY WOULD NOT UNRESTRICT THE WEBSITE.
This article first appeared in Issue 16, 2013.
Posted 3:59pm Sunday 21st July 2013 by Raquel Moss.

APP OF THE WEEK