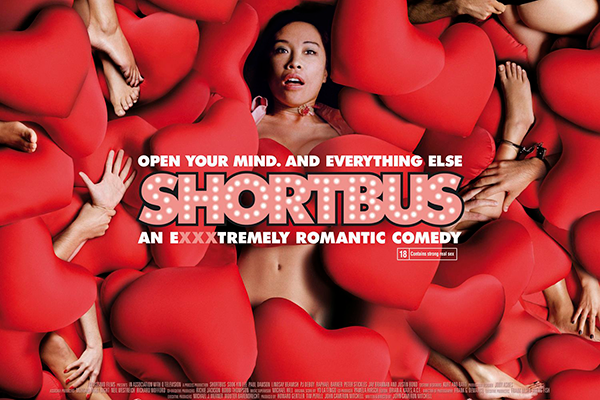 If this is the only reason you’re watching you will not be disappointed – within the first 20 seconds you get your first full frontal nudity, and two minutes later raging piano sex (on pianos, not with pianos). However, here’s the twist: it is totally unerotic. Director John Cameron Mitchell set out to “remove the cloud of arousal to reveal emotions and ideas that may have been obscured by it.”

The plain and sometimes “icky” nature of the sex scenes did not, however, stop the film being labelled as pornography. Many critics questioned whether Mitchell needed to be so explicit if all he wanted to do was explore character psychology. Mitchell’s retort: “why not be allowed to use every paint in the paintbox?”

And use every paint he did. This bad boy has every kind of coitus you can think of: in a group, doing yoga, singing the American national anthem, eating chips, etc. Puncturing these eye-opening sequences are lovely moments of of character interaction – if you took out these moments and edited them together you would have a touching 15-minute film about love and vulnerability.

I wanted to see more of these scenes, and more of Justin Vivian Bond, the transgender performer who plays himself as the mistress of the sex club Shortbus (named after the small buses that carry the “challenged” children). If you’re just looking for a film with interesting actors and raw humanity, you could find one with less flesh.