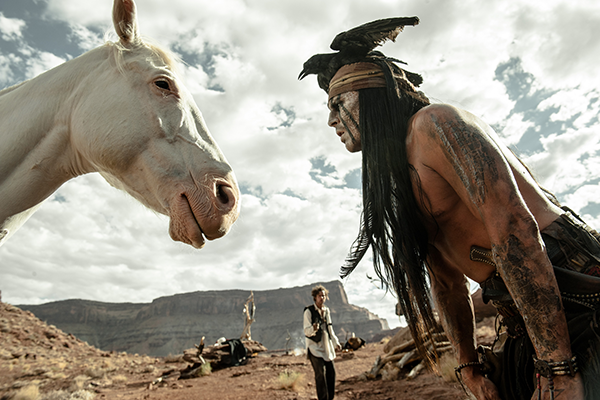 Director Gore Verbinski really rubs film critics up the wrong way. This is likely due to the tendency his films have to be loud, densely-plotted and half an hour too long. His latest, a big-budget adaption of The Lone Ranger, is no exception. Like most of Verbinski’s films (such as the Pirates sequels), it hasn’t garnered many positive reviews. But what did I think of The Lone Ranger? A hell of a lot of fun.

The film is set in nineteenth-century Texas – the time of outlaws, brothels and railways. Armie Hammer plays John Reid, a scrupulous lawyer, and Johnny Depp is charismatic as ever as Tonto, his Comanche sidekick. Not long into the film John Reid is killed by Butch Cavendish, a ruthless and occassionally cannibalistic outlaw. Reid then returns from the dead as The Lone Ranger, a masked hero who cannot be killed in battle. He joins forces with the hilarious Tonto, who has his own score to settle with Cavendish, and the duo set out to hunt down the outlaw together.

Though far from perfect, I thought this movie was a blast. What I liked most about it is, incidentally, what many critics are calling its largest flaw: The Lone Ranger’s appeal changes from scene to scene. One moment it’s a bombastic action flick, then a side-splitting buddy comedy, then a solemn meditation on the racial tensions of the time. Though many reviews have condemned the film as “tonally inconsistent,” “bipolar” and even “schizophrenic,” I personally saw this diversity in charm as a positive. I’d understand the criticisms if these different flavours clashed at all, but on The Lone Ranger’s own idiosyncratic terms, I feel they hang together just fine.

Uniting all of the wisecracks and explosions are some truly stunning visuals (both organic and computer-generated), as well as some pretty compelling storytelling. Will you enjoy this film as much I did? I need only mention the varying reception this film has received – everything from zero to five star reviews – to reveal there is no guarantee. But I’d give it a shot.
This article first appeared in Issue 16, 2013.
Posted 3:59pm Sunday 21st July 2013 by Basti Menkes.