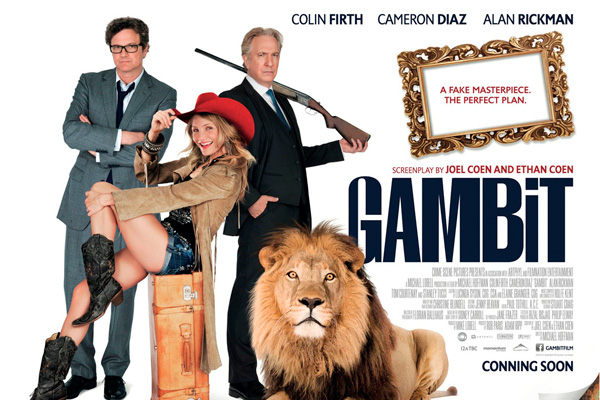 I had low expectations for this film. Just by looking at the poster, I could tell what kind of movie it would be (a bad one). I wasn’t disappointed.

Starring Colin Firth, Alan Rickman, Cameron Diaz, and a variety of lazy national stereotypes, and with a screenplay by the Coens (who should really have known better), Gambit has something to do with an art heist and a long con. Mostly, though, the plot is a rickety clothes horse upon which to hang a variety of flimsy, dowdy, tweedy gags, the kind of utterly predictable piffle that makes stuffy middle-aged British women chortle and say things like “jolly good” and “that’s a bit naughty!”

The plot is derivative, the writing is crap, the jokes are lame, and the crude parochialism is cringeworthy in the extreme. (Poking fun at the Germans and Japanese? Seriously?) Every actor turns in a subpar performance, even Diaz, which is really saying something given that her mere presence in the film guaranteed it would be mediocre at best. (In fact, her best acting occurs during an extended dream sequence early in the film, during which she says absolutely nothing.)

I intensely disliked this film; but then again, I prefer my garbage to be obnoxiously awful rather than merely mediocre. If a film is bad, it should at least have the decency to do it properly, and Gambit goes full retard. I found myself slightly enjoying the scowl it smacked across my face, the shrivelled sensation in my balls, and the way it plastered me to my seat, mortified on behalf of all involved in this stinking turd of a production.

I could be generous to this movie. I could point out that some of its jokes are mildly amusing, that some of its scenes didn’t make want to eat my own face, and that its characters, though one-dimensional, unsympathetic caricatures, occasionally said things that weren’t a viscous stew of cliché and horse shit.