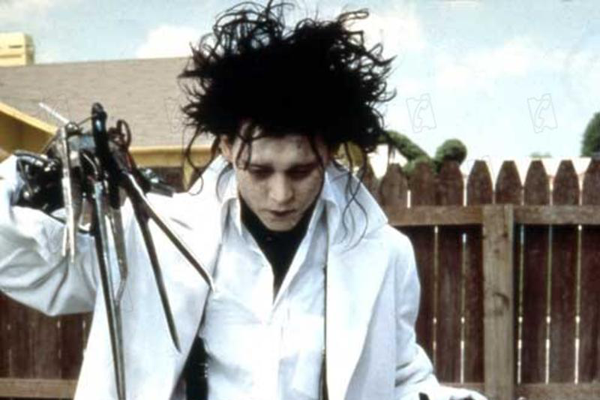 Edward (Johnny Depp) is an artificial creation who has croutons for hands. (Just kidding, they’re scissors!) He lives high on a hill with his father/inventor who intends to give Edward real hands in due time. But when his father dies unexpectedly, Edward is left alone and unfinished in the big scary mansion, until Peg (Diane Weist), the lovely neighbourhood Avon lady, comes across him and insists that he come to live with her family. Edward is thrown into the weirdness of American suburbia that chews him up and spits him out again as he falls in love with Peg’s beautiful teenage daughter Kim (Winona Ryder).

Released in 1990, Edward Scissorhands was Johnny Depp’s breakaway from his pretty-boy image and the beginnings of a fruitful (some would say relentless) creative relationship with director Tim Burton. The film is Burton at his best: whimsical, dark, and touching, with none of the self-indulgent wank found in the later films when he was given too much money (Dark Shadows – I’m looking at you).

The film is impeccably cast and acted, with Depp making an affecting and deeply emotive performance despite playing an almost non-verbal character – Edward is like a gentle, sad dog, so present and understanding but ultimately too different from the family.

For me, the real star of this film is the original score by Burton’s go-to music man Danny Elfman, who has said himself that it is the work of which he is most proud. Fantastical and heartbreaking, you definitely shouldn’t listen to it late at night in the Science Library, as you will start weeping into your Film Theory textbook and the health sci army will realise you’re a filthy arts student crashing their territory.

Which brings me to a cautionary note – this film is VERY, VERY SAD. I first saw it when I was 10 and it ripped my tiny heart right out of my chest. This cult classic has a sense of sweet melancholy that is hard to find elsewhere and will remind you of what Burton does best (for the love of God, Timmy, back away from the blockbuster).
This article first appeared in Issue 12, 2013.
Posted 1:24pm Sunday 19th May 2013 by Rosie Howells.