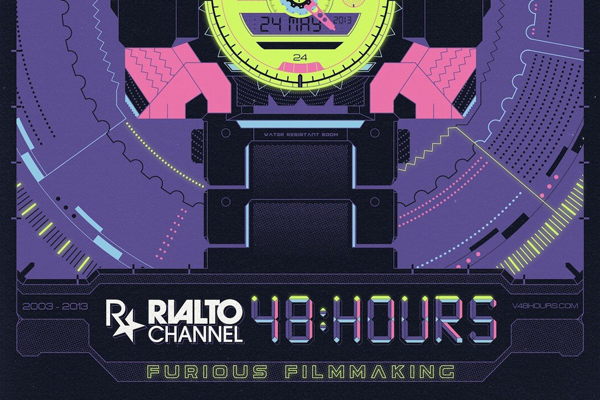 The 48HOURS film challenge is upon us again. Nominations closed last Friday, and production will begin 7pm this coming Friday.

The 48HOURS film challenge has been running since 2003 and is now in its 11th year. Contestants are allocated a genre at random, and must produce a film between one and seven minutes long. All films must also include some random element such as a prop, lines of dialogue, or a camera move. Films must be submitted by 7pm Sunday 26 May, and this deadline is extremely strict; one of the organisers’ favourite lines is “it’s called 48HOURS, not 48HOURS and five seconds.”

Over 4,000 shorts have been produced for 48HOURS, attracting over 3 million views between them. The competition’s highlights have included the hilariously unnerving Jesse McCloud: The Journey; and Brown Peril, a mockumentary about a Tongan badminton player. Meanwhile, controversy reigned in 2004 when Taika Waititi’s deliberately bad Heinous Crime took out the grand prize.

I spoke to Tom Hutchison, who has competed in 48HOURS on four occasions. By now, he has his schedule down pat.

“You turn up at the 48HOURS HQ, and you pick your genre out of a hat,” he explains. “You get let out at seven and run back to your team, you all sit around a drawing-board with pizza, and you freak out about how you’re going to do this genre.

“That’s about the first three hours until around 10pm, when people agree that they’ll make this one story happen. Most of the team at that point go to bed, leaving maybe two or three writers to try and flesh out the script overnight. In the morning, the director – if he hasn’t been up all night – will show up and the writers will throw the script at the director. The director always hates the script, but it’s too late, they just have to shoot it.”

The rest of the time is spent frantically contacting actors, extras, and people with the equipment and props needed to produce the film, followed by shooting and post-production. It is this last step with which Tom has experienced the biggest problems.

One year, Tom submitted his film only to find it had exported without music or background sound. Tom and his friend and collaborator Freddy fixed the sound and pleaded with the organisers to screen the fixed version out of competition. The organisers agreed. “And then we went to the screening, and they played the one without the sound anyway,” Tom recalls. “And you could hear the audience the whole way through, you could hear people breathing and stuff.”

Another time, a computer glitch led to the film’s dialogue being incomprehensible. “We were almost in tears, that was brutal,” Tom says. “I think we may have left the screening before the end of it, actually, because we just couldn’t handle sitting there – that feeling of embarrassment of being one of those teams that people feel sorry for.”

Two years ago, Tom and Freddy were assigned “sex education” for their genre. Tom devised a nature documentary-style plot about a lonely man who drinks himself into a stupor and hires a prostitute. Freddy, meanwhile, wanted to incorporate an artsy dream sequence. The pair decided to integrate the dream sequence into the sex scene, and Freddie, on the fly, devised an abstract light show with neon egg and sperm. When the film screened, Tom’s slavishly written plot was panned, while Freddie’s light sequence drew comparisons to 2001: A Space Odyssey.

“You hope you’ll make the deadline, but mostly you just hope you’ll make a film, and that’s the main point of it, I think – to get a film done. Because there’s not any ordinary weekend where you and your mates go, ‘alright, let’s make a movie and let’s finish it.’ That just never happens in the film industry, and you wish it did.

“So when I do 48HOURS, I’m not really aiming for the glory – I just want to get something made and get it on screen, and do it with my friends. You don’t get too many opportunities to do that. So the deadline doesn’t worry me too much any more, because you know if you do everything properly and work hard enough, then you will just about always make it. Unless something goes terribly wrong. Which it does.”
This article first appeared in Issue 12, 2013.
Posted 1:24pm Sunday 19th May 2013 by Sam McChesney.