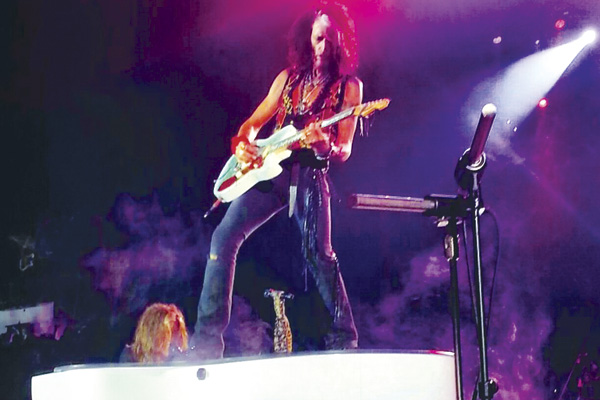 To call my experience at Aerosmith’s gig last Wednesday night a surreal one would be an understatement. Due to the incompetence of and poor communication between the staff scattered around the Forsyth Barr Stadium, it was not until final support act Wolfmother had wrapped up their set that I actually managed to get a hold of my tickets and make my way inside. As I scanned the miscellany of attendees around me (everyone from CEOs to metalheads to teenage girls), I tried in vain to gauge the overall vibe. Were these people excited? Dubious? Hostile?

My contemplation was broken by a sudden dimming of the lights, followed by a large surge of smoke and Aerosmith themselves striding grandiosely onto the stage. Despite the energy exhibited by the band, it was evident from the very first note that they’d be battling the stadium’s notoriously poor acoustics for the entirety of their show. The sound, even from the favourable distance and elevation of the VIP lounge, was a muddy, reverb-y mess, each second of music smothered under the echo of the last. Even when massively-mouthed vocalist Steven Tyler was yelling brazenly at the audience between songs (e.g. “HOW DO YOU LIKE THAT, HAMILTON?”), it took some serious effort to work out what the hell he was saying. Only a handful of songs managed to stay afloat amidst all the sonic detritus, such as the hook-heavy classics “Walk This Way” and “Rag Doll.” Everything else sank to the stadium floor, merging with the urine and lukewarm Speight’s that had already made its way there.

But even if I and a good half of the audience were struggling to get into it, the sixty-somethings on stage were having a whale of a time. Steven Tyler pranced around the stage vibrantly all night, swinging the silver mic stand around him like a broadsword, even leaping onto the piano at one stage during the melodramatic encore of “Dream On.” Unfortunately, his back gave out after doing so and he had to be helped back down onto the stage by four large security men (okay, that’s not quite true).

They ran back on stage for a second encore, playing what sounded like the start of a U2 cover, at which point I exited the building out of self-preservation. The other cover they played earlier that night, an unfathomable hard rock rendition of The Beatles’ “Come Together,” warned me that they do not treat other people’s songs with much reverence. Their approach to their own material was loving and artisan though, hammering out all of the hits (“Dude Looks Like A Lady,” “I Don’t Want to Miss A Thing” etc.) with gusto and panache. What a shame then that each song hit us as little more than an obnoxious blur, making Aerosmith’s much-anticipated Dunedin show an underwhelming one. Forsyth Barr, sort your shit.