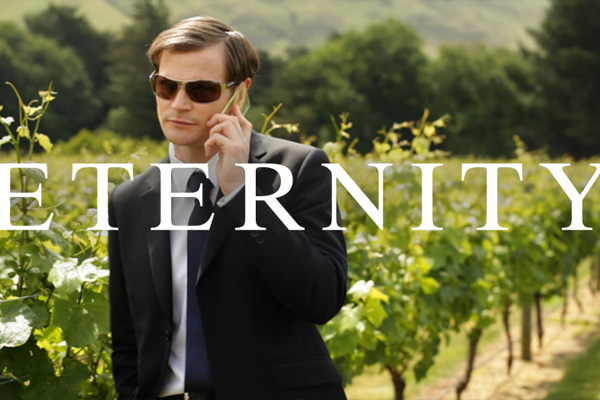 Eternity is a Kiwi sci-fi thriller written and directed by Alex Galvin. Set in the near future, it stars Elliot Travers as Richard Manning, a Hong Kong-based police detective who makes a right mess of things in the film’s tense opening sequence. His only shot at redemption is to travel to New Zealand and enter a simulated world in which he must crack a seemingly unsolvable murder, that of wealthy property investor Martin Donovan (“strangled while family members and guests are in the room next door.”) What ensues is a genuinely intriguing Agatha Christie-style whodunnit, but with an added sci-fi twist – the simulation becomes infected with a virus, and suddenly Richard is fighting against the clock for his very existence.

At a succinct 78 minutes, Eternity is an absorbing and thought-provoking little movie. I found myself truly invested in its central mystery, and was surprised at how wrong my initial suspicions as to the identity of the murderer turned out to be. Hopefully you fare better than I did. Aside from a couple of incompetent cast members (I’ll leave you to discover who), the performances are solid and convincing. Most impressively, this movie transcends the amateurish feel of many local flicks with its glossy finish and sumptuous colour palette. This is no doubt the result of Galvin’s success with previous film When Night Falls, which was released to critical acclaim in NZ, Canada, and the US.

It isn’t groundbreaking in concept or execution, with more than a few nods to layered-reality thrillers such as The Matrix, Inception, and the TV show Life On Mars, but Eternity offers enough intrigue and suspense to justify its existence alongside these influences. Despite a couple of issues with pacing and momentum, Eternity is a rollercoaster ride worth taking.