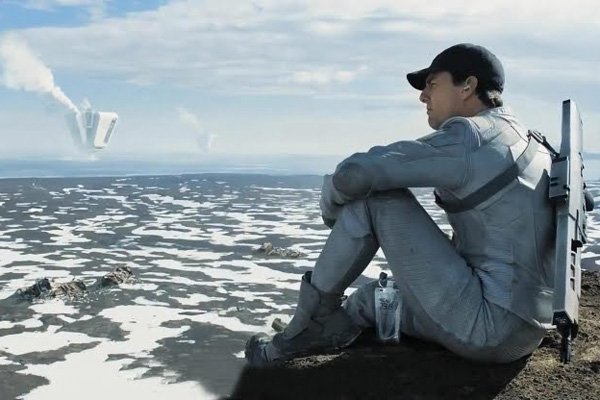 Oblivion tells the story of the last man and woman on Earth, who are both attractive and like each other (that’s a stroke of luck, huh?). After aliens blow up the moon, our planet is ravaged by natural disasters, and war ensues between humanity and our galactic enemies. Although we won the war (yay!) our planet was wrecked by nuclear weapons (lame!), leaving Jack (Tom Cruise) and Victoria (Andrea Riseborough) to do a bit of cleaning up before they can join the rest of humanity on Titan, one of Saturn’s moons. With only two weeks to go before they leave Earth forever, it is only fitting that all the secrets of the universe are exposed to them. And gosh darn are these big secrets!

Not often in our day and age do I literally have no idea what is going to happen in a film. It was refreshing to be constantly shocked, though I wasn’t overly surprised to see Morgan Freeman reprising his role as Wise Old Man Who Has All The Answers – he does seem to be the go-to-guy when a Hollywood film has to do a lot of explaining. Freeman aside, it was nice to see actors that aren’t usually in big budget blockbusters. I find Andrea Riseborough very interesting (and although her nude scene could not have been more gratuitous, she does have a nice bum), and it was great to see Kiwi Zoe Bell kicking some ass with the all-stars.

As inoffensive as Tom Cruise was, unfortunately there are some really lame things that go with his territory, like extended vanity shots of him riding a motorbike to soulful soft rock, and “witty” one-liners. The film lost a chunk of realism every time Cruise quipped some cocky, indifferent bullshit instead of just being a normal person. But overall, this is really good, pure science fiction with amazing visuals, cool twists, and interesting themes that you could enjoy even if you’re not into aliens (i.e. if you don’t have a soul).