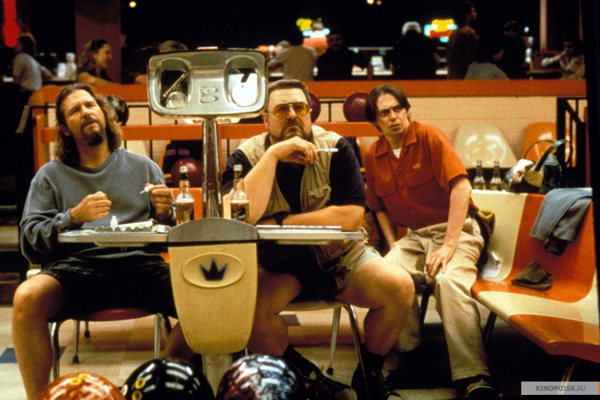 The Coen Brothers (Joel and Ethan) wrote, directed and produced this cult comedy classic 15 years ago. Jeffrey “The Dude” Lebowski (Jeff Bridges) is a lazy, unemployed stoner living in LA, who hangs with his bowling buddies, drinks White Russians, and enjoys long hot baths while listening to tapes of whale sounds.

Life takes an abrupt turn, however, when The Dude is mistaken for Jeffrey “The Big” Lebowski (David Huddleston), a millionaire from LA whose wife who owes some bad people some big money. Two confused thugs flush the Dude’s head and urinate on his rug to coerce him into paying a debt he knows nothing about. The Dude pays The Big Lebowski a visit hoping he will replace the rug, but ends up accepting a one-off, high paying job to play delivery-boy for the money owed.

The film’s cult following has spawned a Lebowski Challenge drinking game, worldwide Lebowskifests, and Indudependence Day and The Day of The Dude (officially on 6 March, the movie’s release date in 1998), which both involve achieving nothing for the day.

Some guy known as “The Dudely Llama” has also set up Dudeism – The Church of the Latter-Day Dude, the slowest-growing religion in the world. Dudeism is a priest-ordained religion which teaches that preaching or yelling out your religion at others is “implicitly undude.” You can be ordained as a Dudeist Priest online – currently there are over 160,000.

The movie also has a great soundtrack which includes Bob Dylan, Elvis Costello, Creedence Clearwater Revival, Sons of the Pioneers, and Nina Simone.

So go and watch it, enjoy a White Russian, then check out The Dudespaper online – a lifestyle magazine for the deeply casual and the official newsletter of Dudeism. It has some great reads, particularly the origins of the F-word, and the art of Dudeitation (meditation of the Dudes).

Or if you don’t feel like reading anymore, then go Dudeitate, man.