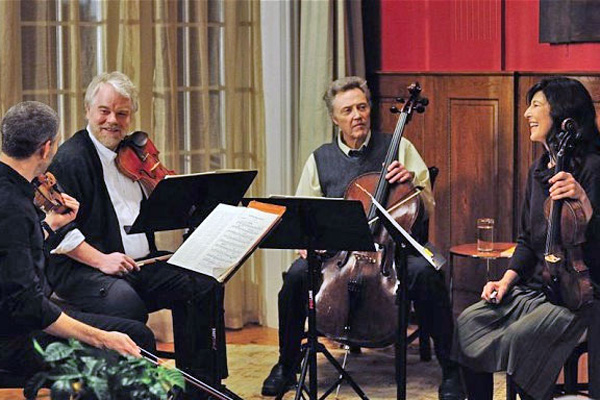 Like Lex’s pseudo-political banter or a Unicol girl’s acquisition of the fresher five, it’s a certainty that Oscar winners will undo much of their good work with subsequent awful films. While Performance (released elsewhere as A Late Quartet) never reaches the murky depths of a Halle Berry/Catwoman scenario, it is nonetheless a muddled, uninspiring, and ultimately dull effort from an exceedingly talented cast, including Christopher Walken, Philip Seymour Hoffman, and Catherine Keener.

The film opens with Walken, cellist and leader of a two decade-old string quartet group, telling his three colleagues and friends (including Keener and Hoffman as a husband-and-wife duo) that his early onset Parkinson’s may signal the inevitable disbanding of the group. This acts as a catalyst for simmering tensions, romance, and competitiveness to resurface between the four, with dramatic yet sadly predictable results.

The dynamics of the group are interesting enough, as are the impassioned speeches about the relevance of classicism, but they are drowned out by the tepid love affairs and multiple storylines. Not enough time is given to the separate plot strands, which become so disparate that the film resembles Crash more than an analysis of the lives of four friends. Walken, despite putting in his finest performance in some time, is especially wasted in the potentially rich role of a man whose lifestyle and livelihood are threatened by illness.

The film struggles to juggle its weighty themes of mortality, infidelity, and fame, and feels like a bad cliché of an indie film. It ends up with more melodrama than an average Days of Our Lives episode, each plot contrivance signposted miles in advance and noticeable to anyone who’s seen a film before. For a film that has so much to say (i.e. so many metaphors to ram home) about the passion and romance of the quartet’s music and muses, it fails to inspire either, and even the sporadic use of the Beethoven soundtrack fails to inject much life into the proceedings.

This is the sort of film festival-goers like to fawn over without any specific reason other than “awards-worthy” material and a handful of Oscar winners.