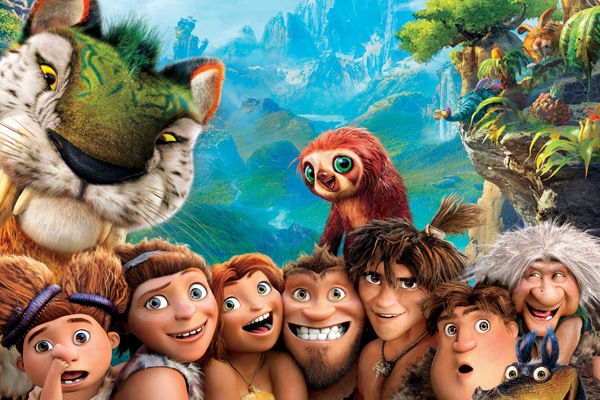 I’m at least 15 years older than this movie’s target audience. That’s fine though, because as innumerable sanctimonious reviewers love to point out, a good kids’ film should also appeal to adults. Maybe it’s because kids are stupid, so their opinions don’t really signify much. Maybe it’s because a good story and well-rounded characters are universally desirable traits. Either way, it’s a nicely self-serving principle and I’m more than happy to adopt it.

The Croods tells the story of the eponymous family of Neanderthal cavemen who live trembling under a rock. Father Grug (Nicolas Cage) likes to scare his kids with tales of the world’s dangers (the tales invariably ending with “... and then they died!”), but daughter Eep (Emma Stone) yearns for excitement and adventure. When a ridiculous, 2012-esque apocalypse looms (Pangaea apparently broke up in the space of about a week), the family must follow Guy (Ryan Reynolds), a resourceful Homo sapiens sapiens, towards a safe new home.

That’s about it, really. Raymond Chandler this is not, and whimsical slapstick replaces plot for most of the film’s 99 minutes. Most scenes involve the family running away from either volcanic explosions, lethal animals, or a combination thereof – but in true kids’ flick style, it’s not entirely clear what can actually harm the characters given that they are routinely crushed by boulders and survive falls from great heights.

Reynolds is much less irritating in animated form, in which I don’t have to look at him “act.” Of course, I can’t see Emma Stone either, but then again her voice is half the fun. The real star, however, is the animation. Shockingly, the 3D actually enhances the experience rather than making my brain hurt, and The Croods features a fantastical, psychedelic environment that’s part Avatar and part Alice in Wonderland (the 1951 acid version, not the 2010 Tim Burton monstrosity). I wanted to see more of the flying tortoises, but sadly it wasn’t to be.