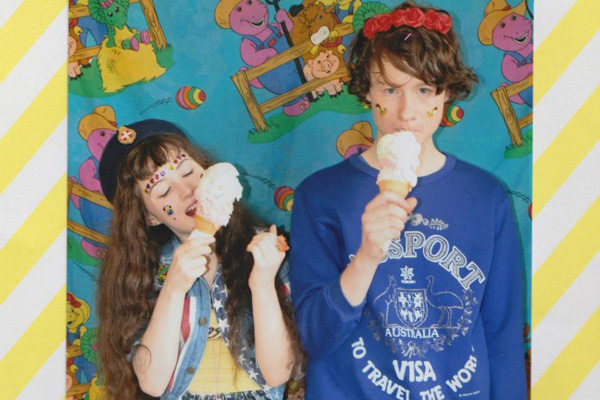 Astro Children are a Dunedin shoeglaze/spacepop band comprised of childhood friends Millie Lovelock and Isaac Hickey. Recently they have been enjoying huge local success, with latest single “Jamie Knows” topping Radio One’s song chart for seven weeks running. Critic caught up with the duo recently to discuss which corner of the universe they’re off to next.

How do you share songwriting responsibilities?
Millie: The songwriting feels pretty equally shared. Isaac is the only person I can “jam” with – because I have known him for so long, we sort of feed off each other when we are writing songs.

Do you draw influence from other rock duos?
Isaac: We’re both lifelong White Stripes fans, and I like the minimalist sound that lots of two-piece bands have.
Millie: I feel like the restrictions we have as a two-piece are really helpful creatively. The White Stripes were there a lot to start with because we didn’t know how to play without bass, but now I am more comfortable with the size and sound of my band.

Did you adopt the retrofuturistic space-themed aesthetic first and then try to tailor your music to it, or did your music inform it?
Isaac: I think they both kinda developed together. When Millie started using lots of pedals with her guitar was when I think we started to sound “spacey,” but we were called Astro Children long before that.

You just shot a music video for your song “The One We Start With.” How was that?
Isaac: Really fun! We got chased around and jumped on by a bunch of children, plus we had a food fight and rolled down a hill. Basically we behaved like children for a day, it was super fun. We haven’t had a chance to watch it yet, I think they’re still adding the finishing touches to it.

How much of your material has been professionally recorded?
Millie: If that means in a studio with lots of flash gear, then none. Studios don’t really seem like our thing.
Isaac: We have an EP called “Lick My Spaceship” that was recorded at The Attic last year by Lee Nicholson, and also our single called “Jamie Knows”. We’re planning on recording a full-length album up there really soon.

Do you have plans to release your music physically?
Isaac: The first EP was released on CD, I think we’ll do the same for the second one.

Do you plan to approach the likes of NZ On Air in hope of sourcing recording or music video funding?
Isaac: We’ve thought about approaching NZ On Air. The ways they give funding are a bit too closed off to bands who have lots of potential but aren’t particularly well known. But I suppose we might as well try.

Your recent single “Jamie Knows” showcases a more polished, melodic version of Astro Children. Is this a direction you hope to pursue?
Millie: That is actually quite an old song that we re-recorded. More melodic is something I would like to pursue, but “polished” isn’t something I am too into. We’re a band that is best rough.

Where do you feel you fit in Dunedin’s current musical landscape?
Millie: I think we fit into the “we played way too many gigs last year” category. We like playing live a lot, and we both have trouble saying no. But I think we’ve settled into the scene quite comfortably.

When’s your next gig scheduled for?
Isaac: We’re playing on Friday 26 April at The Crown with Toy Destruction and Not From Space. We’ll also do a screening of our music video when it’s finished.

What are your hopes and plans for the future?
Isaac: Hopefully we’ll have another EP or album done soon, and maybe have toured some more. In May we’re going to Auckland. Millie’s other band, Trick Mammoth, are playing up there so we thought I might as well come too so Astro Children can play.
Millie: Playing with Japandroids would be really cool, if someone would like to put in a word for us! We’d love a couple of nice reviews, maybe a record deal...