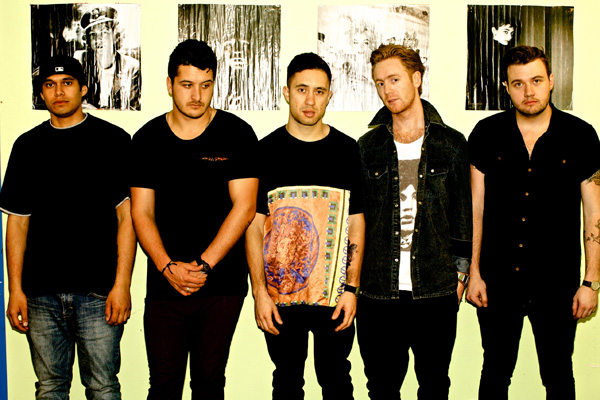 Six60 is everybody’s favourite New Zealand roots band. Born and bred right here in Dunedin, the whanau-loving, roots-remembering bunch of bros have recently been enjoying some international success, with audiences in the US and UK reportedly finding them “amazing,” “awesome,” and “incredible” (sources to be verified). Let’s just hope the band doesn’t forget where it came from.

Critic recently caught up with Six60 over the phone. Here’s what they had to say.

So you’re in New York at the moment, have you just played a gig there?
No, we just did South by South West down in Austin, Texas, and are in New York for a couple days having a bit of time off. Then we’re heading over to Toronto, and then back here for a show.

How do you guys feel you were received at SXSW?
Oh, it was amazing (x2). We did nine shows over the course of four days, and it was awesome man ... everyone who saw us was really into what we were doing and loved the energy of the live show. They felt a lot of things we’ve been searching for as songwriters, you know? That sort of electronic-rock-full-of-soul sort of stuff we’re going for really works. It was refreshing to hear, it’s amazing the amount of praise we get here.

Yeah, how do you find your music is digested and appreciated internationally compared to locally? I always thought a big part of Six60’s brand was that very, uh, “Kiwi” thing, I wasn’t sure people outside of NZ would get it.
Well if you LISTEN TO THE ALBUM, there are only a few songs we give the Kiwi vibe to. I think that’s why it’s been received so well over here, the range of stuff we do is ... has been ... uh ... really well received.

On your official website your music is described as “as dynamic, versatile and unexpected as your backstory.” I was wondering what about a backstory could be called “unexpected” and “versatile”?
“Unexpected” because we all have different musical backgrounds, and that’s what we incorporate into all of our music. Some of us have hip-hop backgrounds, some of us rock, some of us punk. It’s the combining of all of those genres at any time during a song or during the album that makes our music “unexpected” ... I guess that’s the best way to answer that.

That mix of genres is described quite colourfully on your Wikipedia page as “a blend of soul, rock, dubstep and drum ‘n’ bass, extended singer-songwriter ja-”
Mmm.

Who wrote this? Was this a really big fan or did you guys write this yourself?
It was actually a review we got by an Australian after we did an Australian festival, this guy wrote a really big spiel about us on a blog site. We just copied that and put it on the Wikipedia page (laughs heartily).

So “hard-rocking guitar work duels with synthetics and low-end bass over percussive rhythms,” this is what that Aussie guy wrote?
Yeah.

Also on your Wikipedia page, it states that “Dunedin is like Palmerston North in the way it is renowned for its drinking party culture and loosely behaving females.” Was this also the Aussie guy? A crazy fan maybe?
I have no idea, people change it all the time ... we have a guy who keeps going on there and making himself a member of the band as well, it’s been funny. It must’ve been him.

So you have some insane fans then?
Yeah a couple of crazies, but for the most part they’re pretty good.

Speaking of your fans, how many chads does it take to change a lightbulb?
How many what, chads? What’s a chad?

Chads! Kinda like a Scarfie? I think you’d recognise one if you saw one.
Well, I dunno (giggles).

Well how many members of Six60 does it take to change a lightbulb?
Uhh, probably just the one.

Just the one? Quite efficient then. There’s an urban legend floating around that on the lease of 660 Castle Street now it’s written that any time you guys play in Dunedin, the after-party has to be at that flat. Is this true?
Well one time we played the Union Hall and we brought a keg, uh, I mean a couple kegs to the people living at Castle Street. I don’t know about official after-parties, but we did do that that one time. I’m not sure if that still happens (chuckles). We don’t get to come down there anymore as much as we want to, it’s a bit of a thing that’s all like that.

Are you a fan of Critic back from your uni days?
I do vaguely remember it, but I don’t think I read it too often. I was drinking a lot too, so...

Right. That’s probably a while ago you guys were at Otago. What was it you studied?
I went down for design, Maitu went down for law ... but we ended up leaving to do the music thing.

Do you think you’ll ever come back and study at Otago?
I think I will ... though I don’t think at Otago. But I’ll definitely continue to study at some point.

How do you guys self-promote these days? Just recalling how in your early days you handed out business cards after your gigs.
I think we tried a lot of things when we were starting out, that’s where that business card thing came from. For the most part we focus on social media sites, we’ll promote our entire NZ tour just through Facebook and Twitter.

And you’ve found success through that?
Yeah, definitely. It’s been incredible.

Your Wikipedia page also describes you guys as “a powerhouse in New Zealand music.” I’ll assume you guys didn’t write that?
No (irritated).

Do you consider that a fair statement?
I don’t know, I guess there’s a lot of big bands in New Zealand, a lot of different genres. I don’t think any band would describe themselves as that, not in New Zealand anyway.

So you guys didn’t write that particular line?
(After a long pause) Mmmm.

You say in your most popular song that people shouldn’t forget their roots. I was wanting to see if you subscribe to your own philosophy by asking you – what’s the best root you’ve ever had?
(Chortles) Ummm, I’ll probably just have to say my girlfriend. (Cackles) I don’t think I’ll (guffaws) be able to do any better than that.

I have a friend who was wondering if you were planning on bringing out something a little more heavy?
It’s hard to say ... we’re definitely writing material at the moment, trying to stick to the whole outlaw (?) genre kind of thing. I don’t think we’ll be going heavier, I can’t see that in the immediate future anyway. We’re always open to new ideas, so we’ll just have to wait and see.

What change (musically) can you foresee?
I think we’re looking for a middle ground, obviously we’ll have the heavy and we’ll have the light, but I think we’ll stay and come up with new ideas within that level of heaviness and softness.

And you guys are coming back to Dunedin in April to play a gig at the Union Hall? I imagine your return to town will be a fairly big deal.
Yeah I’m really looking forward to it, we always have a pretty big night after a show there. I can’t wait, man.

Yeah, no definitely! I’m Rising Up at the very thought. What do you guys have planned for the next couple days?
Mate we’re actually on our way to the Rangers ice hockey game in Madison Square Gardens. We’ll probably go there, have a few beers, see where the night takes us.

Do yourself a favour and see them too at Union Hall on 20 April.