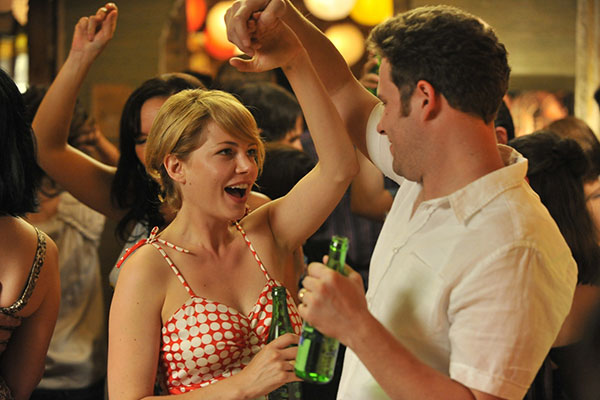 In a world full of tacky rom-coms and second-rate vampire movies, Take This Waltz is a breath of fresh air.

The film centres around Margot (Michelle Williams) and her relationships. A travel writer, Margot is growing restless in life and in her marriage of five years to Lou (Seth Rogen), a chef and cookbook writer. Margot’s chance encounter with a tall, dark, and handsome stranger (Luke Kirby) prompts her to re-evaluate the life of quiet desperation that she has been living, and their instant chemistry soon turns into a serious infatuation. Though nothing is actually “wrong” with Margot’s marriage, it is clear that it has become stale and static, and their living situation has regressed into more of a flatting situation than a marriage.

The fact that I was the only person in the theatre for the entire duration of the film did not put me off. Although very little actually happens, I couldn’t help but stick it out to see what the outcome was going to be in this awkward love triangle. There are a few clumsy lines and cringe-worthy scenes, but these are more than made up for by the complexity of the characters and plot.

The film is not short of full frontal nudity (with such a rockin’ body, it’s hard to believe that Michelle Williams has had a baby!) and graphic sex scenes – in fact, they are so explicit that it wouldn’t surprise me if the cast wasn’t “acting” at all. The chemistry between Margot and her love interest is convincing, and it is this compelling attraction that makes the movie such a success. I have been mentally contemplating the many facets of this film ever since I saw it, and would highly recommend it for this reason alone.