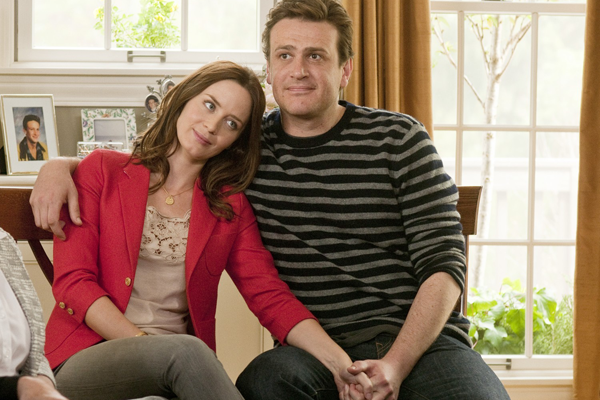 The Five Year Engagement opens with Tom proposing to his girlfriend Violet. As the pair start to plan their wedding, Violet is accepted into a graduate psychology program in Michigan, an offer she can’t resist. Tom selflessly drops his career and moves to Michigan to be with Violet on the agreement that the program will take two years, after which they will finally get married. As time passes, Violet’s program ends up being extended, while Tom’s life goes down the proverbial crapper. The rest of the plot largely focuses on Tom’s depression and resentment towards the situation, and his adjustment to the climate in a town with winters that would rival those of Dunedin’s.

Unlike typical “boy meets girl” rom-coms, the film opens with a relationship that is already in progress and follows through its hurdles and obstacles. Amongst these hardships is a backdrop of quirky family members, awkward moments and unexpected twists while the main duo strive persistently to live “happily ever after”. However, despite the attempt to embed the film with crass comedy, it becomes too heavy as the viewer watches the couple endure complication after complication in a plot that is emotionally draining. By halfway, the film has become utterly gruelling and it starts to feel as though the two would be better off apart.

The film contains several scenes which will leave animal lovers nauseated, and for this reason it should not be viewed by anyone who is offended by hunting and/or interior décor made from deer carcasses. Other offensive details include a scene with a carrot, as well as Emily Blunt’s overbearing teeth which are quite obviously porcelain veneers and distract throughout the entire film. All in all, it was two hours of my life I will never get back.