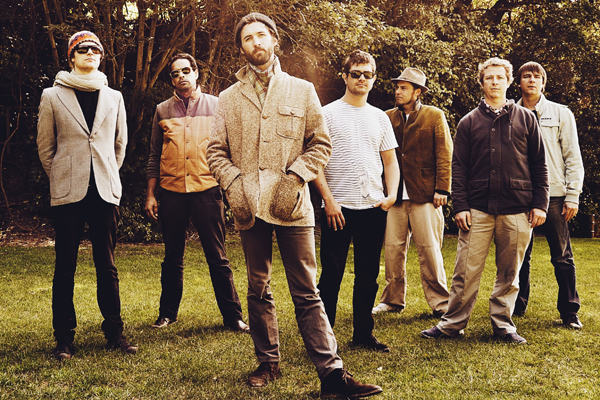 We’re all familiar with the rhythmic reggae dub that has sound-tracked many a Kiwi summer, known as The Black Seeds. It’s been four years since their last album and their latest release – Dust and Dirt – is a wee bit different while still being completely the same.

With a slight emphasis shift from vocals to instrumentals, and the addition of a little bit of psychedelia, Dust and Dirt brings a little bit of something new to the table, while still managing to deliver that authentic Black Seeds sound.
Always reliable for their trademark beats, but even more so for their excellent chat, I had a yarn to guitarist Mike Fabulous about all things Dust and Dirt.

You guys seem to be going from strength to strength – massive tour, a new album – how are you feeling about it all?
Really good, obviously. We’re really happy with the album. We basically just made an album that we were happy with – that we liked – which isn’t always the case so we did well on that front. Then it’s been a real bonus because it’s doing well and people have liked it. You can’t always guarantee that just because you like it, it will be well received by everyone else. It’s nice, especially since we’ve been in the game for a while now, that people still care!

It’s been four years since Solid Ground – what have you guys been doing?
We’ve been touring and working on other projects – I guess it’s just really easy for a couple of years to slip by and to not have another album, if you haven’t booked in to record it and I think that was part of the reason. We’re going overseas as well as touring New Zealand and Australia, our other side projects and having families so it wasn’t hard for a couple of years to slip by. And when we did book in time we wanted to do it differently to Solid Ground, in terms of giving ourselves more time and not having pressure from the bloody label wanting it to be “pop-y” and all that kind of thing so that’s why it took a longer time. But I think we really went from that and it was better to take a bit longer and make a better album – you feel so much better about the whole thing.

You’ve been described as “barbecue reggae” – how would you describe your sound?
I think it’s a very amusing term – it’s a source of a lot of jokes within the band. But it is ill-informed and I think it was probably quite accurate circa 2003 but it’s not relevant ten years later. But I like BBQs and I do like reggae so I guess that can’t be too bad! It’s hard to describe – it’s music whose main ingredient is reggae, but that isn’t pretending to come from Jamaica, and is influenced by many other sounds.

How would you describe the development of Dust and Dirt compared to Solid Ground?
There’s definitely some new sounds in there – a few reviews have compared it to Pink Floyd, which amuses me and I quite like – it’s not something I would have thought of but I think it’s to do with the slightly more psychedelic nature of some of the songs. I think we could have made this kind of record around the time of Solid Ground if we had’ve had more time. It’s a far better representation of the band – everyone has had a better input into it and we’ve had more of a chance to stretch our legs.

Tell me about recording in your own studio compared to other experiences you’ve had?
It’s pretty awesome – pretty spectacular. I can’t explain how much nicer it was not having to look at the clock all the time. When we recorded our other albums, you’re booked in for two weeks, you have to have it done in that amount of time and there’s always that pressure there. Not having that has totally changed the game. And then there was fresh air and sunlight, which you take for granted most of the time in your life, but when you have to go without for a few months when you’re recording an album, you start to get studio-itis – you go a bit nuts after a while. When you’re working long hours and you don’t know what time of day it is outside, it gets a bit toxic, so it’s really nice to be able to just smell the flowers as it were.

Mike Fabulous – that can’t be your real name?
My real name is Michael John August. The Fabulous thing started with a RockQuest idea – I dreamt up this idea of having this group called Mike Fabulous and the Star Factory Orchestra – I would be the conductor of this industrial-type orchestra with people banging and crashing pieces of corrugated iron and needless to say, that never happened. But for some reason, the name stuck.

The Black Seeds are playing their Dust and Dirt release tour at Sammy’s on May 24. Tickets are available from Cosmic Corner and Eventfinder.
This article first appeared in Issue 12, 2012.
Posted 7:58pm Sunday 20th May 2012 by Lauren Wootton.