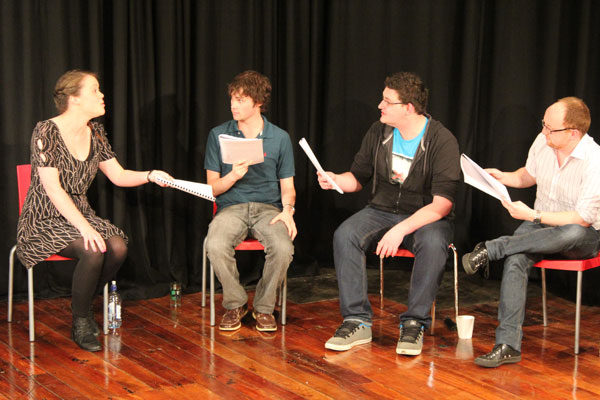 Brought to you by: Stage South
Next Performance : May 26

The theatre scene is back on again this week in Dunedin, bringing with it some awesome work from Read Out Loud. This series of play readings is a whole new way to experience theatre and gives some choice New Zealand work the chance to experience the spotlight, without bringing it to a full production. It gives up-and-coming playwrights a chance to hear their work and to gauge how audiences react.

The season is brought to us by Stage South, a group of theatre practitioners from all aspects of the theatre, from actors and directors to writers and designers, and led by Clare Adams. Read Out Loud hopes to promote some of the wonderful professional theatre works that go on in our fair city, and from this production, it’s clear that it does this pretty darn well. After last year’s successful season one of the most promising scripts, Two Fish and a Scoop, has been taken from the readings and is now being produced at the Fortune for their next production. Just goes to show, you never know what might happen!

Read Out Loud got off to a strong start this year with a reading of “Another Stupid Wall”, a play by Joey Moncarz, winner of Play Market’s most recent young writers’ competition. Set mostly in an Israeli bakery on the border between Palestine and Israel, this comedic piece explores the obstacles faced by the next generation as they deal with the prejudices and traditions of generations gone by.

Now of course, with only the readings and an incredibly short time to rehearse, you kind of go in thinking, “okay, so this is going to be about some award winning script, instead of watching actors with well-defined and rehearsed characters.” Well I’ve got to say I was pleasantly surprised. Not about the script – definitely one clever piece of writing – but to go along with it they had one hell of a cast of actors. Despite being seated the entire time, you still found yourself seeing well-built and thought-out characters on stage, a true testament to the talent of those involved. And like I said, talented actors backed up by an equally clever script. Drawing on connections between Māori-Pakeha relations in New Zealand and Palestinian-Israeli relations in the Middle East, the script manages to capture the comedy in it all and create a story about the dangers of prejudice and the nature of conflict. Good ol’ morals aye.

This is definitely something worth checking out and the next installment is due on May 26 at 3pm in the Fortune Studio. Come along for some great company, a free feed (always a nice incentive) and a pretty amazing look at the professional theatre work that Dunedin and NZ has to offer.