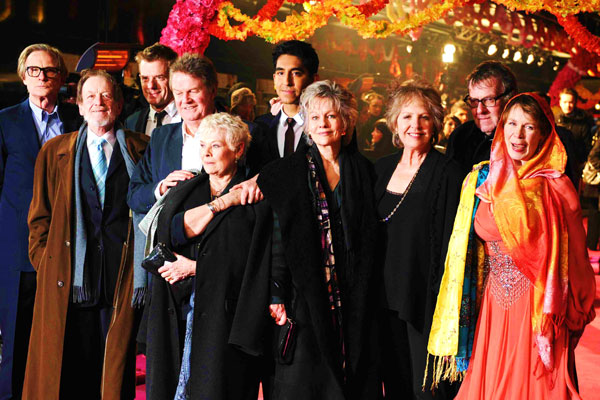 The Best Exotic Marigold Hotel follows a group of bitter and bored 70-plus retirees who feel the need to fight the injustices of an ageist English society by travelling to India to “find themselves.”

Abounding with distinguished actors, each of the seven main characters take on an eccentric elderly role. Among them is the retired homosexual judge, the dried-up gold digger, and the neurotic housewife stuck in a loveless marriage.

This unlikely travel party meet at the airport and bond over the knowledge that they will be staying at a recently restored hotel for “the old and beautiful”. After arriving in India, they are greeted with a chaotic tip run by the young and overly-enthusiastic manager Sonny (Dev Patel). In the first week the individuals either struggle or thrive within their new cultural surroundings. Muriel (Maggie Smith) describes her first day in India as an “assault on all senses”. Other characters such as Evelyn (Judy Dench) and Douglas (Bill Nighy) find India to be a realm of escapism from their mundane lives in England. Through their adventures, the viewer is treated to a visual feast. A myriad of shots and sequences brilliantly capture the landscape, the colour, the everyday vibrancy and the hustle and bustle that is India.

The film allows for a witty and seldom-explored perspective of the elderly. It provides a series of hilarious jibes that touch on what are no doubt common concerns of the elderly which kept the audience in stitches. Ever the pessimist, Muriel claims she would not buy unripe bananas any more, for fear she would die before they would ripen.

Going into the film, I dreaded the mindless banter of such a seemingly dreary cohort. I left pleasantly surprised and entertained, and daresay I could even go back for round two.