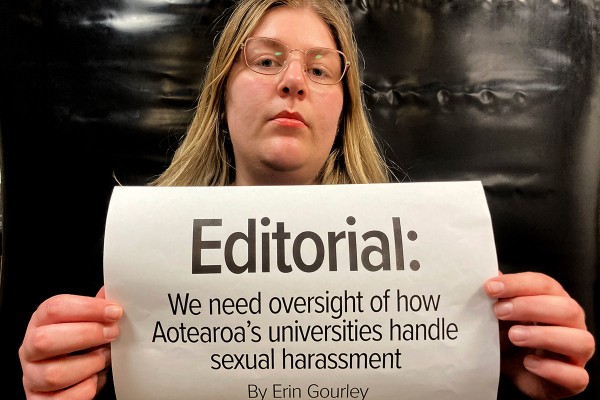 This week in news, Stop Sexual Harassment on Campus Aotearoa (SSHOC) are calling for the creation of a new organisation to monitor how universities respond to sexual misconduct on campus. That’s a great idea that needs to be implemented.

Universities across the country have failed their students and staff when it comes to dealing with sexual misconduct in universities. Critic’s own 2019 investigation into sexual assault at Knox College demonstrated that, and there are examples from other universities like AUT and Auckland as well.

In response to these issues being brought to light, as well as tireless advocacy work from groups like Thursdays in Black, every university in Aotearoa now has some policy dealing with sexual misconduct. And that’s good.

The problem is that it’s very difficult to know whether those policies are doing what they’re meant to do: holding perpetrators of sexual assault to account in a meaningful way. The indications of what’s happening under the policies, through accountability mechanisms like the Official Information Act and discipline reports released by the universities, only point out the glaring flaws. We can ask how many complaints were upheld or not upheld, and get the broad reasons why, but that’s about as much detail as we get.

So we know about that big issues with the policy — for example at Otago, investigations are immediately suspended if a perpetrator leaves the Uni. But we don’t know, on a more minute level, what the experiences of the people affected were. We don’t know which processes were followed and how people felt about those processes. All of those factors are also important in knowing whether the policy is effective. If a complaint is not upheld, maybe it’s because the process is difficult to navigate or prepare for.

There’s a lack of transparency. But that transparency has to be balanced with the obviously sensitive nature of the investigations. That’s where SSHOC’s new campaign comes in. In their proposal, people involved in sexual misconduct processes at universities, whether they’re perpetrators or victims, could voluntarily have their information passed on to an independent body. The body could assess the university’s response to sexual violence from an objective standpoint and decide whether it’s sufficient. Universities would be audited in this way every few years to see how they’re doing.

As SSHOC administrator Kayli Taylor pointed out in the news article, this is not a complete solution. But it is a good start, and one that would provide some much needed oversight and consistency.

You can find the SSHOC petition at their website, sshoc-aotearoa.org.nz.