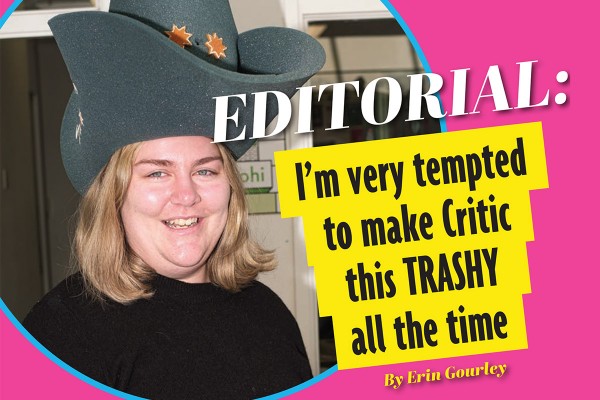 Howdy folks and welcome to the Critic Tabloid issue! Oh boy, oh boy, do we have some salacious stories for you in this one! We’ve finally lost all sense of direction and become an actual rag! We’ve filled this bad boy right to the brim with some piping hot scoops that were legally obtained through legal phone tapping and long distance photography.

Some may say it’s immoral to make a tabloid and that we should remain committed to journalistic principles of fairness and balance, but to that I say: BAH HUMBUG! Tabloids are so much more fun. We get to use ellipses and exclamation points with abandon, along with all-caps, like a boomer who has just discovered Facebook! You could write an entire magazine while very high and no one would be able to tell!

The Critic Tabloid has a longstanding history of entertaining its readers with total rubbish, broken down into smaller and more digestible chunks of dross. On top, we like to throw a sprinkling of more rubbish with some grainy photographs, usually the kind that objectify or shame women. Zing!

For all of you out there who say “but the kind of journalism you’re doing just isn’t responsible! Being sexist and racist all the time isn’t cool!” Just think about that. Are you trying to suggest that we should have some filtering process before we publish things to make sure they’re not harmful? That sounds like blocking free speech to me! Who’s on the wrong side of history now, hmm?

So in a way you see, by publishing utter shite that has not gone through any fact-checking processes at all, or drivel that means nothing when you think about it for more than the time it takes to read the (unnecessarily long) headline, we are upholding journalistic principles of fairness and balance. Really, the Critic Tabloid is the last bastion of free speech in a world of WOKENESS and CENSORSHIP.

Plus, how would we sell ads to all these wonderful free market companies if we weren’t catering to sexists and racists! Think about that!

It’s so much more easy, profitable, and enjoyable for us to make a magazine that requires no self-awareness or editorial standards. And that doesn’t seem like a problem at all, because we’re so distanced from our role in society that we’re no longer capable of self-reflection.

Read on for some spicy stories! You won’t believe what happens next!