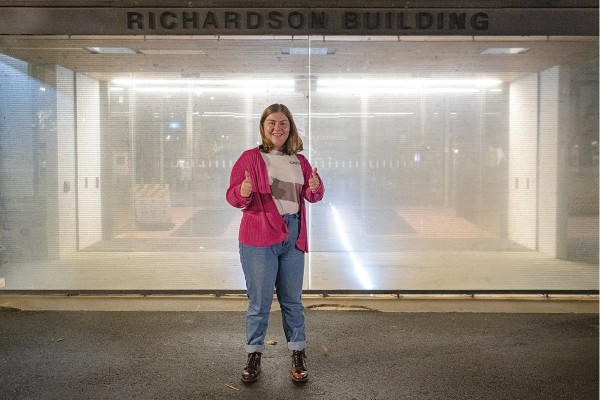 Some of you will hate me for what I’m about to write. But it has to be said.

In Dunedin, there are a lot of towering concrete buildings that block out natural light and look like they were built to withstand an atomic bomb. That’s brutalism. But something about the Richardson makes it more brutalist than the Hospital.

It’s huge, it’s concrete, it’s ugly, but the lines are clean. The concrete has a ridged texture. There are balconies and mysterious boxes that jut out from the sides and seem like they could kill you if there was an earthquake.

The danger is what makes it so thrilling. There are gas pipes for the science labs. There are ominous vents that face into the passageway between the towers. Halfway through last year, the lift dropped, made a giant crashing noise, and was out of service for a good month or so. There are two long columns down the middle of the building that have an unclear purpose. When you walk through the passage next to Te Tumu there is a shiny silver pipe above your head. What does it contain? We will probably never find out.

The building looks bigger from the outside. There is probably a nuclear reactor somewhere inside, but no one can find it because there are so many columns, bridges, and rooms —presumably installed to divert us away from the truth. There are secrets inside the Richardson, and I assume that includes tunnels or bunkers underneath. People say it's soulless and belongs in a post-apocalyptic movie, but that’s what makes it great.

It’s also important to note that the building was named after John Larkins CHEESE Richardson.

For all of the chaos and risk, there is order. The diagonal concrete ridges along the building are satisfying. You can look at the building from any angle and it falls into a regular geometric pattern. If the Richardson Building was a person, he would be a six-foot-five gulag guard with steel teeth. He could kill you, but he’s also very committed to keeping you on schedule for your day.

You might think that this is just the deranged ravings of an ex-law student with Stockholm syndrome. You might be right. But whether there is a psychological fixation here or not, the Richardson Building has grown on me over my time on campus.

As a 20th Century architecture expert told the ODT back in 2011: "You can't just bypass it because [you consider it to be] ugly, concrete, with no merit and a mistake of the past."

Archway is still fugly though.