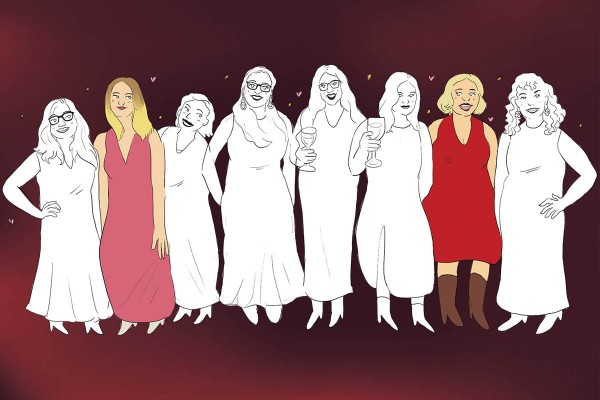 The Bachelor: The One-On-Ones

The coffee date is a staple of Dunedin socialisation: from the Radio 1 kids at Kiki Beware, to the stressed socialites at RDC, it’s a chance for everyone to find love. We sent Jack and his remaining lucky ladies on three separate dates to enjoy the intimate corners of Dispensary and the Staff Club. Will a connection be forged in the fires of caffeine and hormones?

First up was Jasmine, where the pair shared a brownie and a coffee on a brisk Monday morning. They talked about their medical histories—  he’s allergic to apple skins, she’s lactose intolerant— and what they look for in prospective partners. Jasmine says she’s “mostly looking for a father figure for my goldfish, Suzie, she’s 2 years old, so it shows you I’m nuturing, maternal and can take care of a piece of shit”. Perfect girlfriend material. Despite the easy chat, Jasmine is beginning to stress about the other women in the competition, the euphoria of girl-power long gone. “I’m competing with funny bitches so it’s gonna be interesting,” she muses. “Jack and I saw the Bills, so I think that’s good luck, but if those bitches see the Bills, then I’m fucked.” However, her and Jack have begun to take important steps in their relationship: they followed each other on Instagram, she assisted him with an Insta story, and even invited him to a flat party. Jasmine’s not going down without a fight. After coffee, Jack had an important meeting to attend so changed in front of her (just added a blazer but sex sells magazines, babe). “My standards are so low, the fact that I saw Jimmy Choo men’s cologne and I was like, it’s not Lynx? What a man,” Jasmine murmurs. She’s pleased. In reflection, Jack enjoyed the date, and said “someone who is willing to be up at 9am for a coffee date, that’s a big sell. That’s someone who's getting me out of bed, motivating me, making me a better person.” Aw.

Next up was Amelia, on a sunny 11am Tuesday. The pair had a “chinwag” (Jack’s words) about the woes of wearing glasses, and delved into some family history. According to Amelia: “I found out that he’s not a very good cook, and he can’t drive.” But like most women, she’s willing to push through his obvious flaws. Red flags can be festive decor, amirite ladies? He also offered to steal a street sign for her, which she refused, on record, for legal reasons. When asked about the vibe of the date, Jack thinks, hard. "It was relaxed, there wasn’t any tension or anything, very chill and casual.” So, no sexual tension? Interesting, Jack. However, he finally admits: “She is very attractive, there, Critic! I said the silent part out loud!” His overall impression of her is: "high, good, yes.” Amelia, who Jack describes as “more shy than the other girls,” admits that she’s perhaps keeping some walls up. “We’re good friends, but there could be more, like we have a similar sense of humour. I won’t be too put out if I don’t get through, because the other girls seem really quite invested.” She’s somewhat pessimistic about her chances, saying "if none of this works out, if he doesn’t end up with anyone, he’s a sweetheart and girls should approach him”.

Finally, Amanda, at 3pm Tuesday. Dispensary is closing soon so off to the Staff Club the pair go. Rather than coffee, the lovers opt for a pint, perhaps giving Amanda a subtle edge. Sinead, Critic Editor, informs me that this decision means that Critic can’t reimburse Jack for the date, meaning he knowingly, and willingly, paid out of his own pocket for such a bold move. With their “brewskis” the couple sit outside, admiring the view of the Clocktower and the “duckies” (Jack, again). In the fucking funniest thing to ever happen in this competition, Jack pulls out his phone and plays “Low-Fi Hip-Hop Beats to Chill and Study to” from a Spotify playlist for some “ambiance”. I am speechless. Regardless, Amanda endearingly enjoyed the solo time: “I feel like I got a better picture of who he was, rather than in the group dates that can be quite overwhelming.” The pair talked about everything, from the cannabis referendum to euthanasia debate. “We shared personal stories, he definitely opened up his heart,” gushes Amanda. Jack admits that Amanda “had the best chat,” calling her “witty” and the date “romantic”. The competition is slimming down, and with this emotional connection comes danger of heartbreak. “It’s so hard competing with two other gorgeous girls. I’m a big simp for him already, I’m entering dangerous waters. Gross! I must keep up my bad bitch appearance,” Amanda laments. No one said this was gonna be easy.

With the single dates done and dusted, Jack is left to make a devastating decision. His small face crumples. “This is the hardest so far,” he whimpers. I feel bad for him, but not bad enough to stop me making a sex joke. Classic chat. Ultimately, he chooses to eliminate Jasmine. “It isn’t based off a flaw, it really isn’t,” he assures me. Unfortunately, Jasmine isn’t available to come in for an elimination. So, Jack is forced to break up with her over Facebook call, which he chooses to do openly, surrounded by aghast Critic staff. What occurs next is possibly the worst minute of my life. Jasmine looks confused, heartbroken, her soft face crumpling in the pixelated light. “I feel like Taylor Swift circa Joe Jonas breakup,” she confides to Critic afterwards, and proceeds to quote the song ‘Forever and Always’. Jack is eerily calm; some would say too calm. He exits the call, a slow, sinister smile spreading across his face.

Next week: Hometown dates. What will Amelia and Amanda’s flatmates think of the President? Especially if Jack can’t drive to their flats, and can’t cook, will the young brunette boy be okay???