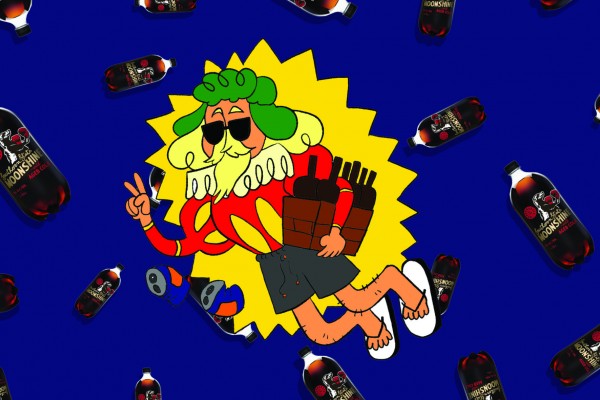 Honey Badger Southern State Moonshine is genuinely going to kill someone. I don’t know how, and I don’t know when, but someone’s gonna fucking die.

It’s absurdly cheap, at $8.99 for a bottle with 6.9 standards – pretty much as good as you can get in the world of RTDs.

The first thing you’ll notice is the conspicuous use of the term ‘moonshine’. What that tells you is that they were not legally allowed to call it bourbon, because it hasn’t been aged for three years. It’s underage, feisty and probably dangerous, just like their core target market.

What can I say in regards to the taste? Well, the team proudly boasts that the mix was made by the same food scientist behind Cody’s, which is certainly not anything to ever be proud of. It’s like saying you got dating tips from the same guy as Harvey Weinstein.

Nah, to be honest it tastes like any shitty bourbon and coke. If you switched it out for Diesel no one would know the difference. I don’t see it really taking off with the small-town bogan market – they like cans because they’re easier to throw out of ute windows. But the Dunedin Breathas should be sucking these back like air come summertime.

A major downside, which applies to all bevvies of this size and strength, is that at 6.9 standards, one bottle is not going to be even near enough. Two bottles is pretty ideal at 14 standards for a night, but the problem is that you’ve been drinking B&C, and everyone knows that 13 or more B&C standards and you turn into an absolute fucking dog cunt that ruins parties.

If you finish two bottles you’re going to be a fucking pest going around stealing drinks, which will in turn make you even more of a cunt, you’ll get in a disagreement with a host, hit on someone you shouldn’t, and before you know it you’re blacked out and trying to fight a fence post. Don’t be that guy. Don’t drink bourbon and coke.

Pairs well with: Passing out underneath someone’s car because you were out of drinks and decided to try drinking actual Diesel.