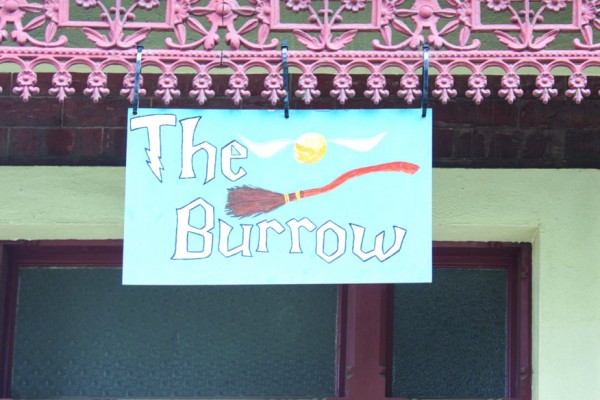 The Harry Potter series shattered literary and film-making records. One record that is sure to be unique is the influence it’s had on the naming of student flats. Here in Dunedin there are  a number of flats with names influenced by Rowling’s world.

The first Potter-inspired flat was the Chamber of Secrets (2007) at 150 Frederick Street. A flat of Potter fans, they hand-made a sign depicting the Hogwarts crest. The flat won the Te Roopu Māori “Best Name or Sign” in OUSA’s 2007 House & Garden awards. The judges said that the flat’s sign was “Fucking awesome!” When the tenants of 2008 didn’t want the (frankly amazing) sign, the Chamber Boys took it with them to their next flat.

There have been flats named: Hogwarts, Hydewarts, Three Broomsticks, Honeydukes, Godric’s Hollow, The Leaky Cauldron, and two separate flats (on Park Street and Great King Street) called the Shrieking Shack. In Rowling’s world, the Shrieking Shack, situated in the wizarding town of Hogsmeade, was commonly known as “the most haunted house in England”. Back in Dunedin, the Shrieking Shack on Great King Street received its name in 2010 from Scott Honeyfield, a dedicated Potter fan, and his flatmates. Scott told me the age and character of the house suited the name, and that they had “a pretty awesome Harry Potter themed red card.” Interestingly, the house is also well known for its toilet under the stairs that cannot accommodate persons of height. The toilet may allude to the shitty living conditions Harry Potter experienced while living with the Dursleys on Privet Drive.

The Shrieking Shack on Great King Street has maintained a Potter-inspired name since 2010, though its signs have come and gone. It’s currently named The Burrow and has a wonderful sky blue sign, featuring a broomstick and golden snitch, with the Potteresque ‘lightning bolt’ font . “It’s not much, but it’s home,” is how Ron Weasley described the Burrow to Harry when he first visited in The Chamber of Secrets. I’m sure the current flatties feel the same way.