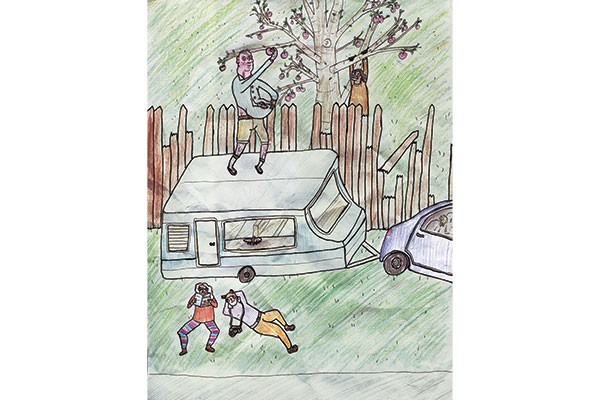 Hello! It is your Granddad here! Just dropping you a line to let you know how we are getting on at home! First, a little family news. Grandma has gone to visit her sister in Taupo, as you know I cannot stand that woman ever since she pointed out my going bald in 1988. I remember it well because your mother had just returned home with a bad mullet, as was the rage back then, and Grandma’s sister said “well David’s head looks like a pig’s titty” (meaning I was going bald at the back), and this has painted my memory of her until this day.

So I’ve hit the road! I’m driving the old caravan to Hamilton and back. It’s mostly to keep myself busy until Grandma returns, but also to let the old girl loose, as it’s been ages since she’s felt the wind through her undercarriage (the caravan, not your Grandma ha-ha, I am only joking do not worry). It has been very good to get away from those Dutch neighbours of ours, as it seems to be clog season and Sven is whittling clogs from an old stump and blasting out oom-pah music with no shirt on. I despise that man but I still act like I’m his friend because he is much larger than I, and could easily best me in a brawl. I picked up a nice couple from Germany who were hitchhiking! I do not usually do that sort of thing, but the open road can be a lonely place. They were very nice, and we talked about a great many things. We got into a fairly heated argument though, because when a bird did a big shit on the window as we were driving I said, “how could such a small bird bum make such a big mess!” And the German lady tried to tell me that birds do not have bums, but rather a ‘cloaca,’ from which both poos and wees come, but I was having none of it. Birds have bums, all animals do. Eventually I had to say “whose car is this? This is my vehicle and within its walls my word is Law, and there is to be no more talk of cloacas,” and they both backed down. It was just like the time you and your sister tried to tell me that Lemmings do not actually jump over cliffs to their deaths. You said the photographers from Disney pushed the lemmings off. I am still mad about this, by the way. The video is there, and it is real! Why would you try to cover up the tragic demise of the poor creatures! Your grandmother and I are still mad about this.

I took the scenic route through Rotorua just to see the sights. It is true what they say about the smell (smells like poo), but it’s possible that the odour was coming from the septic tank, which is full and I don’t know how to empty it (your Grandma does and has never showed me). Come to think of it, most of the trip has smelled very foul, but that could be the smell of Rotorua being blown around by strong Northerly winds. It is probably that. I also took some apples from an apple tree by the side of the road, somewhere I can’t remember. It looked like it was on a public domain, but once I had a shirt full these kids appeared from behind a hedge and told me that the apples were their Dad’s prize winning apples, and that he started growing them after his divorce and are now the sole source of his self- esteem. But I was having none of it because the tree was pretty close to the road and there was no proper fence. I still high-tailed it out of there before he found out though. If I knew how to empty the septic tank I would have offered to dump it on his trees for fertilizer, as payment for the apples I took. But the guy was probably in cahoots with his council and a genius at knowing where sewage is and is not allowed. I remember when this country used to be free.

I hope all is well with you in Dunedin, and you are not getting up to mischief. I look forward to your reply please.

P.S ‘Pig titty’ was the first thing I ever looked up on the computer at the library and they don’t even look like my head that much. Shows what she knows! -Love Granddad ☺