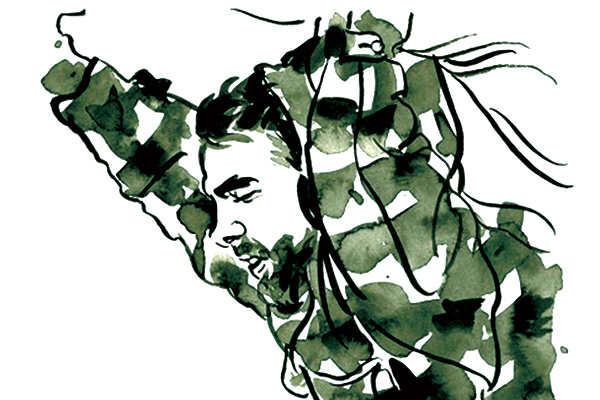 Up through the swerving Brooklyn hill and over the crest past the dozy corner shops and winding all the way down through Happy Valley road; down past the gorse and toitoi, speckled sedge, chickweed, kawakawa, nasturtium, wild fennel, wild mint, borage, and flax; all the way down to the sea, behind the double cream house on the right, there he works: slender, svelte, lithe, limber, lissome, crouched. Pumping air into the back wheel of an upturned bicycle with the northwest sun to warm him. His back is straight and his hips are sunk deep and his head is poised weightless above his neck and shoulders. Posturally enlightened. His clothes, draped on him in soft mural tones, speak in verse: the socks from a neighbor, the sweater made of unwashed wool from the Nelson Markets, shorts from the Otaki op-shop. Six feet tall, sixty-three kilos. Hungry. Restless. Tuis and seagulls overhead cry paeans of praise. Exalted. Twenty-one years old and still a boy, looking up at you through the spokes. Features that hark back to the English New Forest: warm green eyes, gentle beard, tousled mouse-brown hair, nose off-kilter from a bike accident when he was younger. Soft hair. Honey skin that keeps a steady tone on every part of his body. He greets you by name.

You’ve known him now for nearly three years. Ross at the Sunshine Flat, eyes fixed on the flames in the brazier and talking about shamans, Vision Quests, ayahuasca, dreams, rivers, and communes. Ross on Holloway road, another party, crying in the kitchen. Ross at his parents’ house, taking the weight of an expired relationship on his back. Surrender to the sky your heart of anger. Ross and Rosie returning from the silent retreat, afraid to talk. Ross and Louise on the slackline of their love. Ross and you cross-legged on pillows on the floor of his bedroom, returning time and again to the breath. Ross a few wines down, lecturing you on the virtues of connectedness and community and ecology and organics and holistic lifestyles. Ross telling you he has dropped out of university. Ross, crying again, this time knee-deep in a stagnant black pond in a forest in the Takaka hills with midgies and mosquitos buzzing all around, a summer sky so blue it looked almost golden, and the pond so black and still and stagnant and holy that his presence in it was nearly sinful. Ross, your brother, born again right there in that black pond.

Return to the breath. He’ll tell you all about these ideas of his and you will nod, listening closely, with the words floating like dandelions around you and you will nod again, and close your eyes, and mimic his mmm’s. Sit out on the step by the backdoor in the sun, cup of tea in hand, and talk softly about the Cosmos as the very ground beneath you quakes and shudders. The wise sage, the prankster, the dharma-bum, the neo-taoist psychedelic eco-poet, flashes of wisdom and insight ringing like a Tibetan singing bowl through your skull; but:

and return to the breath. A child of the earth and everything beneath it. Dirt on his hands and in his ears and under his nails, worms in his hair, waist deep in compost, clothed in leaves and humus and foliage. Vocation: gardener, organic farmer. Who else would get excited over finding big piles of horseshit a few kilometers from his house?

“But think about the nutrients!”

And so sincere. But:

and return to the breath. Not a perfect friendship by any stretch – a soul that close to yours stirs up rivalry, competition, fear. An inevitable tangling. And in the centre of the tangle, a girl. And in the centre of the girl, a paradox. There was never a confrontation, only something much gentler and awful – a loss of trust, a quiet distancing, a removal of presence and light. Both too proud to put any words to it until that day in black pond in the deep summer heat. A year ago now. And:

Return to the breath. Come back to the hills and the house beside the sea, around the back, in front of the bike. Smile. Breath. Realise that you love him, and tell him so immediately.
This article first appeared in Issue 2, 2014.
Posted 4:44pm Sunday 2nd March 2014 by Hadleigh Tiddy.