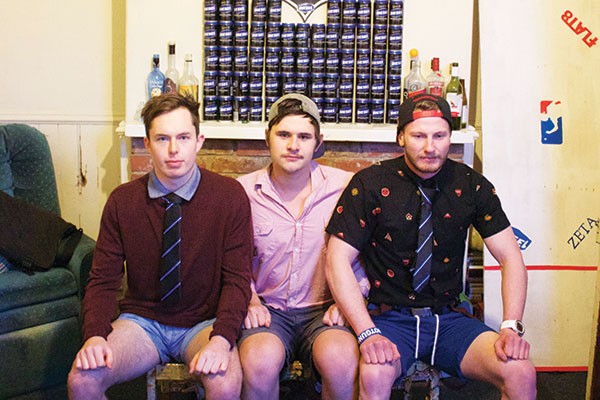 My Castle, My Flat

Critic’s quest for the best flat in Dunedin

This week on My Flat My Castle, we take a look at a group of lads who have taken up residence at the mildly more respectable (if that’s even possible) end of Castle Street.

Living in what was previously known as “the cardboard box”, for obvious reasons, the ZETA boys are typical Dunedin lads. Whether they know it or not, ZETA is actually a girls’ sorority house in the States. The kind of girls you can bring home to your mum, but who can drink your dad under the table.

To their credit, we were kindly welcomed in by three of the four frat boys all in uniform (no, seriously, they actually have a flat tie). It’s just too bad their flat was the equivalent of a small frozen turd with a chimney. When asked why they even considered living in such a hole, the boys said “coz it’s $97.50 a week”. Despite this, they were nearly evicted for not paying their first month’s rent.

The lads claim they are more than just the (poorly drawn) sign on the door. They claim to have a hit song, an adult film, and a whopping 78 likes on their Facebook page. Oh, they also made it on TV at Hyde Street for licking each other’s faces. Topping all of these achievements, they have a ZETA shield, surrounded by Diesels, standing proudly in their living room.

For the brotherhood the boys claim to be, they are quick to throw each other under the bus. Apparently one is naked the majority of the time, and another, who we hope was fully clothed, crashed their neighbours’ party and challenged them to a dance off. One evening, which eventuated in 500 upvotes on Yik Yak, a member of the flat went out on a drug run and didn’t return for a week. Dear God.

When it comes to food, their philosophy is to always cook from scratch. On one occasion, one of the boys became overpowered by the green monster when trying to cook a pizza. Once cooked (the flat mate, as well as the pizza), he began whispering to the pizza. He eventually ran and hid.

Overall, the lads had great chat. With a whopping 78 Facebook likes, this has to be expected. The only thing letting them down is the naked showers they share and the state they keep their flat in. This week, the boys have come in at 8.3 on the rating scale.

We suggest if you want to be part of the ZETA brotherhood next year (who could blame you), head to the boys’ Facebook page where they are taking pledges for 2016. There are four already, so get in quick.

If you think you’ve got what it takes to be crowned the top flat in Dunedin, want your 15 minutes of fame and would like to be in with the chance for a sweet flat feed, email flat@critic.co.nz