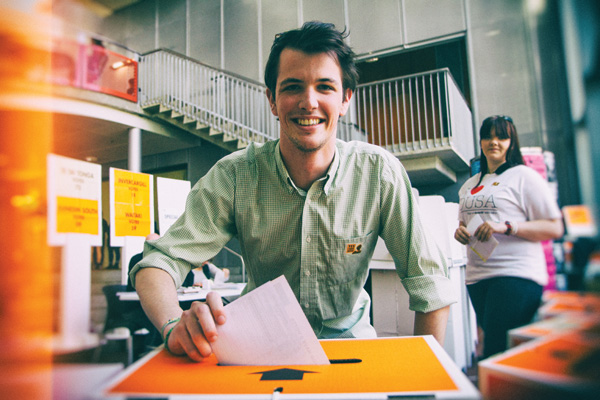 Get informed and get voting

Students at Otago are exceptionally lucky this election, considering all of the opportunities they have to be informed before voting.

After a couple of speed-humps, Critic and the OUSA NZ General Election Drive have finally launched the website studentvote.co.nz – here you can find a succinct collection of Critic’s election coverage as well as the events and videos that the election drive has produced, including an interview with the controversial and politically inspiring Tom Scott of @Peace and Homebrew.

Publication date this week (Monday 8 September) also heralds what, to the best of my memory, is the first Critic-organised event since at least five years ago, if ever. Critic presents Young Back Benches with Wallace Chapman is certain to be polarising, surprising, engaging and drunk, and I expect it will be a must-see. Featuring the finest of the political parties’ youth wings, it is also sure to expose varying policies within parties depending on the generation of their politicians. If anything, it is this event that will best indicate the future that the main political parties are likely to steer the country towards in the long-term.

Finally, next week – election week – will see the publication of Critic’s election special and another gig featuring Chali 2na. It really isn’t that frightening to engage in the decision that will define the future of both students and the wider country; if you disapprove of recent revelations or feel that life is tough as a student, this is the only real opportunity you have for years to express that in any meaningful way.

I voted when the polls opened last Wednesday. Having spent the entire year widely considering all of my options, recent events in the political and media spheres meant that I finally felt absolutely certain about the future I want for myself and for the country, and I put my name to it. Use the tools available to you, think about the next three years for yourself, for students, for Dunedin and for New Zealand, and make your opinion heard. Voting as a student is the single most important opportunity you will have to vote – it’s not only important for the next three years but also informs the direction in which the country will start heading as you enter into the so-called “real world.” You have the next two weeks to do it. There’s no excuse – you don’t even need ID.