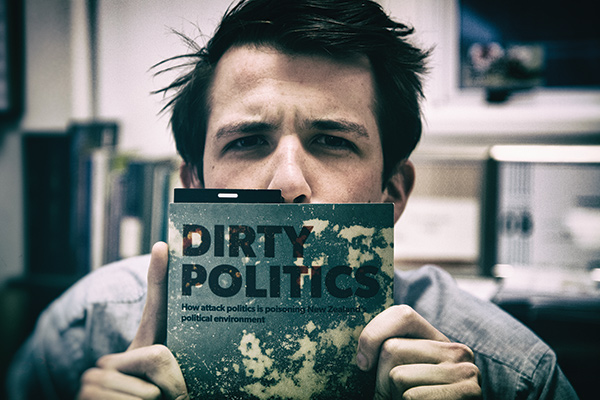 The great Oil spill of 2014 has spread to the students, with recent email conversations released by the anonymous Twitter account @whaledump indicating a conspiracy by Cameron Slater and his buddy Aaron Bhatnager (who is inextricably tied up in Judith Collins’ latest of many headaches) against an Otago student politician back in 2012.

For context, Beau Murrah had his name brought into attention-grabbing disrepute by Cameron Slater in a blog post titled “All about Beau Murrah,” as a reaction to what Murrah later publically admitted was a lapse in judgment. In a debate on the blog, he had suggested that Slater consider “pulling a Charlotte Dawson,” who at the time had just made an attempt on her own life. Murrah completely fucked up; it was a tasteless comment but he apologised in such a way that even Slater reportedly considered removing the original post for a brief moment.

Yet Google search Beau’s name two years later and this is still the first link you will be served. Defending his decision to keep the original post live, Slater states “I am an advocate of owning your own shit. I don’t hide my past posts, even though some of them are terribly embarrassing and re-reading them is sometimes just awful, the fact is that I wrote those and I should own what I did and said in the past. This is one of those situations that should serve as an example to all.” Everyone keep that in mind as the shit-storm around him unfolds.

The classic university student can often be angry and make comments that they would later irrevocably retract. Beau even identified this at the time, labeling himself “some university student troll.” A large level of forgiveness should be expected as the country’s future leaders find their feet, working out through trial and error what is appropriate and what is not.

The leaked emails, however, reveal that there was deep sense of political angst involved in Slater’s attack on Beau, with the “little cunt” being a “Winstonite.” He was also explicitly looking for the future career of a student to be “extinguished” over one comment. The full exchange is reproduced below, and it speaks for itself:

Cameron Slater, 9/10, 5:07am
also a law clerk whose career has just been extinguished

Cameron Slater, 9/10, 5:07am
i've got a screen shot now incase he tries a delete
I think about now he is having a moment of regret
too late

Cameron Slater, 9/11, 9:26am
yep and farrar is clocking him tomorrow

To take a step back and generalise the wider issue at hand, one thing’s for sure: considering a lot of the information contained in Dirty Politics is undeniably linked to the Prime Minister’s office, the population of New Zealand is confronted with the reality that the administration that took over the Government in 2008 is very, very different to that which they voted in.

It doesn’t make the left wing any more competent, but until there’s such conclusive evidence against them, it certainly shows them to be a hell of a lot more honest. And on the appearance of Labour’s competence, there could in fact also be a much bigger media issue at hand, as Politics Editor Carys Goodwin explores in her profile of David Cunliffe on page 12. Take that how you will.