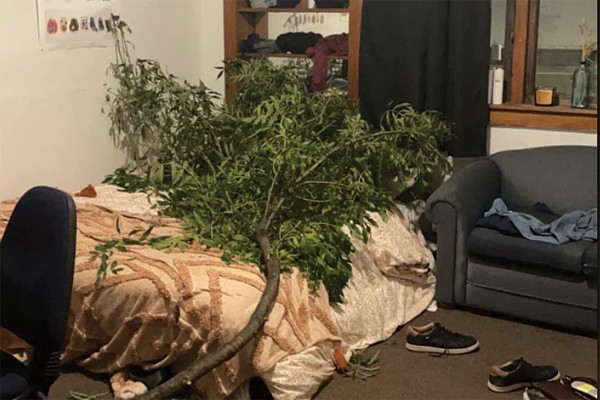 “Maybe I could surprise him ;)” - the tree in a group chat, probably

It’s not often a Saturday night ends with you finding a stranger in your bed. It’s even rarer when that stranger is a tree branch.

Returning to his Cumberland St flat at 1:30am, Seth was getting ready for a good night’s rest when he noticed a “weird, dark bushy figure on my bed”. Thinking that “my mind’s just playing tricks on me,” he flicked on the light and saw what was really lying across his beloved mattress: a “massive fucking tree”. The tree branch was “roughly one and a half wheelie bins in height,” with the greenery covering his entire bed.

Doubling back to his lounge, Seth found “a trail of leaves coming through the hallway and front door”. Outside, “one of the big trees on Cumberland Street just had a massive branch missing.” Someone apparently had managed to take the branch of the tree and took it into his room, which is right off the lounge.

Seth agreed that superhuman drunk strength was most likely involved in the arboreal caper, although he also applauded the meticulous care they took to navigate around the lounge furniture. “It took a very long time for me to remove it from the house, like how did they get it inside? I flipped a table, pushed cups out of the way - but nothing was tipped over at the start,” Seth said with some surprise.

“In a panicking rage,” Seth woke up all of his flatmates, thinking they had been burgled and that this “was a weird clue”. But after finding his most precious earthly possessions (his laptop and AirPods) safe and sound, he discarded that possibility. Next up, he suspected that his flatmates were “fucking with him” - but after repeated denials, he felt reassured that his flatmates “weren’t the type of people to pull such a prank”.

Having hit a dead-end, Seth did what any self-respecting Gen Z would do to investigate this mystery: he made a TikTok. He also posted it to the Castle ‘22 Facebook group, quickly getting a lead when someone commented about “walking past a girl holding a tree”. His flatmates also remembered seeing a girl leaving their driveway when they were returning home. These two people have not been identified or confirmed to be the same person.

Seth’s flatmates have a new theory: that this was some revenge plot. But he reckons “he hasn’t done anything controversial enough… and why take it out on the tree?”

When we last checked, the mystery was still unsolved. Seth reassured anyone wanting to fess up that “I’m not out for revenge, I just want answers,” before adding that “If someone hurt you or if I hurt you, I’m sorry.” Critic suggests bringing an even larger tree branch into Seth’s flat would be the best way to apologise.