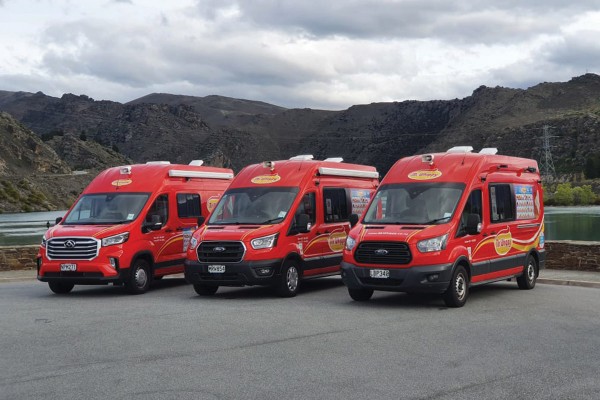 Whip it, whip it real good

The one and only Mr Whippy has hit the streets of Dunedin. They launched with a bang on Saturday, giving out 600 free soft-serves in The Octagon.

The Dunedin business is owned by husband and wife team Steve and Linda Mitchell, who also operate Mr Whippy vans in Central Otago. “We’ve been doing this for ten years,” Linda told Critic Te Arohi in an interview. Formerly running a vending machine business, they stumbled on the opportunity to run a Mr Whippy online — and they’ve been fizzing it ever since.

“We want to say how enjoyable it is owning a Mr Whippy,” said Steve. “My favourite part is dealing with people. Our customers range from children through to the elderly — but everyone loves Mr Whippy.”

With a few ice-cream trucks already cruising around Dunedin, including the infamous Blue Boy, whose jingle haunts the streets of North D well into the night, we asked Steve what really sets Mr Whippy apart. “The presentation of our vans — we’ve got brand-new vans, brand-new gear,” he replied. And of course, *that* bloody jingle: “Some people love it, some people hate it, but everyone knows it.”

Usefully (if slightly oddly), the vans are also equipped with GPS trackers, says Steve, which means you can track where the nearest Mr Whippy van is live, through a link on their Facebook page. “Chasing down the nearest Mr Whippy is often a fun activity families like to do with their kids,” Steve said.

Although this is the first time Dunedin gets a Mr Whippy of their own, the Mitchells have made trips down to Dunedin before, including at a recent food truck event on Union Lawn. Steve told me that Mr Whippy is committed to serving North Dunedin: “We’ll make sure students are taken care of,” he said, “and we hope to be working with OUSA on events as well. We’ve already had some enquiries from students about when Mr Whippy is coming to Dunedin, so it’s nice to be able to give them some good news.”

Mr Whippy’s soft-serve mix is unique to the brand, and is made in New Zealand from skim milk and cream. They are vegetarian, soy and gluten-free, and are also halal and kosher-certified.