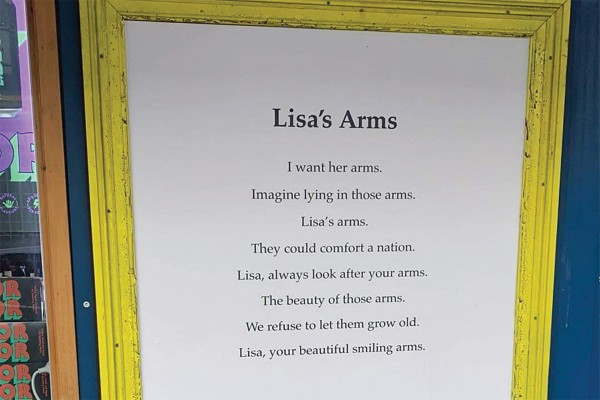 A strange poem fixating on the arms of Olympic kayaker Lisa Carrington has been popping up on posters around Dunedin in the last week.

The poem, “Lisa’s Arms,” reads best aloud. Here it is:

I want her arms.

Imagine lying in those arms.

They could comfort a nation.

Lisa, always look after your arms.

The beauty of those arms.

We refuse to let them grow old.

Initially spotted on September 30 outside Quicker Liquor on George St, further sightings of the poem have been spotted on Albany Street (in that alley near Rob Roy Dairy), significantly reducing the chances that this was a practical joke which went too far.

Intrigued (and admittedly slightly disturbed) by this public display of affection for someone’s admittedly fantastic arms, Critic Te Arohi reached out to Poet Richard Langston requesting an explanation. Richard, who as it turns out also produces lifestyle block fan fiction series Country Calendar, told Critic Te Arohi that Lisa’s Arms was “a light-hearted poem written in admiration of Lisa Carrington after she’d won the last of her Olympic golds.”

“I had an image in my mind of her in her black singlet with her arms holding her paddle. Like anyone who watched those races, I was in awe of her power and arm strength. Who would not want arms like that?” Critic agrees. We all have flabby arms that can only press keys and click buttons, and are in awe of Lisa as well.

Like every good English teacher, though, Richard insists there’s a deeper meaning to the poem beyond worshipping Lisa’s rippling biceps: “Underlying the poem is the business of ageing — something no-one escapes despite athlete prowess or lack of. The Greek poet, Pindar, wrote a terrific poem about athletes — how their achievements ‘raise them high with hope,’ but some day they must face mortality. My poem has a much lighter tone than that and I wanted to finish it on a more positive note.”

The poem was published as part of poster company Phantom Billstickers’ Poem Posters initiative, which has put around 250 poems by 150 different poets on street posters since 2005. All published poets are paid for their poems.

According to CEO Robin McDonnell: “Putting poems on posters is largely about hope… it’s the perfect literary medium for digestion on the street. It can be consumed quickly and shared via social channels if it's meaningful. The beauty of poetry is that if it's not for you then it's easy to move on, having not wasted too much time on something that doesn't add value to you.”