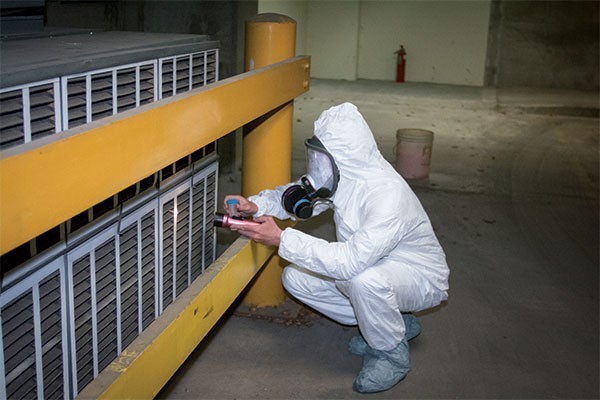 A technical report from July detailed that there is dangerous asbestos in some of the University’s heaters. The original heaters were removed, but many still operate in other buildings.

The University did not respond in time for comment on this article. After hearing about asbestos in the Biochemistry Building, members of the Zoology department raised concerns to the University about the presence of asbestos in their own Marples Building, mainly inside the ancient heaters keeping Zoology students and staff warm on those cold winter nights.

According to Andrea McMillan, the University’s Health and Safety Compliance Head, asbestos was indeed identified in a wall-mounted heater in the Zoology Department’s Marples Building. However, McMillan went on to say that “no asbestos was found in the air” while noting that the heaters in question are radiant heaters, not fan heaters.

The solid asbestos was insulation between the heating elements inside the heater. The fact that it wasn’t airborne meant that it didn’t pose a risk to people. This is because, according to another statement provided by the University, the asbestos found in the heaters was non-friable. The term “non-friable” is used to describe asbestos fibres that are bound firmly to other material and therefore aren’t at risk of wafting into the air where they’ll get inhaled and potentially inflict mesothelioma on students and staff alike.

Mesothelioma, for those unaware, is a malignant tumour (i.e. cancer) that forms the lining of the lungs, the abdomen or the heart after consistent inhalation of asbestos fibres. The looser asbestos fibres that pose this danger are described as “friable” asbestos. While we were told that the asbestos present is non-friable and therefore doesn’t pose this danger, the University did proactively remove all heaters in the Marples Building and replace them with a modern equivalent.

However, the good vibes were not to last. A report on the aforementioned heaters, acquired by Critic earlier this year, indicates that these heaters were in fact unsafe and contained friable asbestos that potentially could be released with “minimal disturbance”. This report, based on an assessment carried out by Asbestos Surveys and Monitoring NZ LTD (ASM) on July 14 this year, discusses the risk of asbestos exposure from the two types of heater found in the Zoology Building over the audit period.

The report measures the heaters against three levels of risk (low, medium, and high). Objects being tested receive a “material assessment” score based on factors such as their location, accessibility, condition, and friability of the asbestos found. The score thresholds for each risk level are 1-5 for Low Risk, 6-9 for Medium Risk, and 10-15 for High Risk.

If you’ve ever seen a grey or brown heater covered with an equally ugly grille, they’re possibly of the same harmful variety that was just removed from the Marples Building.

The two types of heaters in question both received a score of nine, the highest score in the Medium Risk category before they become High Risk. The report details that Medium Risk items will have a “potential of a fibre release with minimal disturbance” and that any “change in any of the calculation factors could result in a possible health & safety risk to occupants.” The report also states that the items in question “should be monitored and addressed in the near future.”

There’s a few problems still present. The heaters are described as having low damage or no visible damage, something which adds zero to the score. If there was any discernible damage on these heaters, the score would at least be increased by two, immediately moving these heaters into the High Risk range (which requires immediate corrective action due to “potential high fibre release”). The only thing between the University being forced to address the problem immediately and doing nothing is the fact that these near-fifty-year-old heaters are not obviously damaged. This is despite the fact that these heaters are so old that the manufacturer has gone out of business.

By virtue of being in the Medium Risk category, there is the potential for fibre release with minimal disturbance. Both heaters were stated to “occasionally likely to be disturbed,” which adds up over time considering that these heaters have been in the department for up to half a century.

These heaters are reportedly no longer present in the Marples Building. But because they are in other buildings, that danger is equally apparent in other locations where these heaters are present.

Consider this a public service announcement. If you see a dilapidated heater lurking in the corner of your room, it may be prudent to keep wearing your mask.