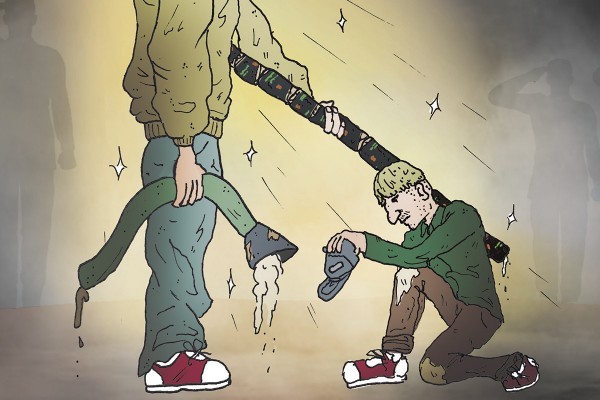 Fistfights break out in broad daylight, witnesses say: “this is dumb”

An initiation at the Leith Street complex turned into a pitifully-sized brawl during the sunset hours of Thursday 23 September. People abandoned their balcony and rooftop seats when the fights broke up, and spilled out into the streets when the music stopped.

Three highschoolers watched the carnage unfold from a swingset just on the other side of the Leith. The kids told Critic that the large group spilled out of the back of one of the flats, and began sending people running down a rocky slope, through the Leith, and up the other side, where they’d skull a bevvy. According to the kids, someone passed out on the roof of the complex, and several fistfights broke out in the backyard and in the street. An attendee confirmed that this was an initiation, one taking advantage of the sunny day to binge drink and brawl along a rocky slope above one of Otago’s most polluted waterways.

Ashe was walking by when the mayhem broke loose. “I saw it, and I heard it too, because it was so loud,” she told Critic. “My first thought was ‘uh oh, someone’s going to die’. It was Six60 balcony-collapse trauma, really.” She said that every single balcony had people packed on it, “packed like a pringles can, but with just enough room to jostle around.” She said that the scene looked like something off of an “images taken seconds before disaster” account. “You know the ones,” she said. We did not know the ones.

“My main feeling was FOMO,” said Ashe, wistfully watching the throngs of drunken young men and women stream into the glass-strewn street. The drum and bass had stopped right around the time that the fights were broken up. But minutes later it was back on, thumping out of a new speaker on the opposite sidewalk. Cars honked as the party began to obstruct Leith Street. “I felt really old and sad, walking through Castle Street and remembering the good old days when that was me,” said Ashe. “They looked like they were having fun and I miss the days where I was having dangerous fun.”

Critic tried to ask the evacuating masses what had gone on, and nobody was keen to spill the beans. “Nah bro, nobody wants to talk to you,” said a presumable second-year as he puffed out his chest. Although the gathering appeared to be well over 100 people, there were no masks or social distancing.

Police told Critic that they received “one call just before 4pm about a party at a Leith Street address, [but] nothing to suggest people were on the street, fighting, or breaching Covid restrictions.” Officers did not attend.

As we walked along the Dundas Street Bridge, a more ominous conversation was unfolding. A group of obviously drunk lads, several with bloody scuffs, were consoling a member of their group. “Don’t worry about him, mate,” said one, referring to someone not in their circle. “I’m sure he’ll wake up."