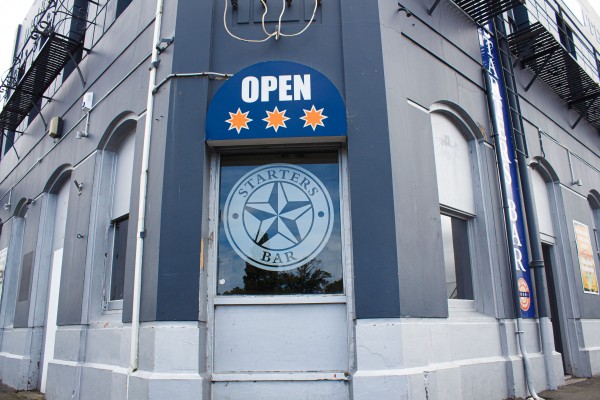 The iconic Starters Bar, beloved by freshers and freshers at heart, has suddenly closed down after a decision by the OUSA Executive.

OUSA, who bought the North Dunedin bar in 2018, cited earthquake safety concerns as the reason for closing down. They are hopeful that a replacement bar in North Dunedin will be up and running by O Week 2022.

In an interview with Critic Te Arohi, President Michaela Waite-Harvey said this was “100% a health and safety decision. We don’t really run things for a profit here, we’re a union, so there’s definitely no financial avenue or angle, which was what made the decision the hardest. This was just a situation we had which sucked.”

OUSA had been weighing their options with the building. “We weren’t taking it lightly before,” Michaela said. But the seriousness of the risk was brought home to them when Otago Uni suddenly shut their Wellington campus after finding that the building scored just 15% on the New Building Standard. The University considered that too dangerous to have anyone working or studying in the building.

“Seeing the University respond so quickly to the risk changed the game for [OUSA]”, Michaela said. “It was definitely a moral decision. Thinking a lot about the what-ifs, of student safety and staff safety, made the decision a lot more clear-cut.”

Starters has not reopened since the Tuesday 17 August lockdown. At that time, their Facebook page announced they would be closed “for the next few days” as Aotearoa moved into Alert Level 4. Even while lockdown restrictions persisted, there was no hint they would be forced to close for good.

Less than a week ago, Starters had announced their re-opening on Facebook, set out a full week of events, including two (!) quizzes, and detailed protocols for how Starters would operate under Alert Level 2.

Less than 24 hours later, a second, cryptic post said that Starters they would be unable to open that week “due to unforeseen circumstances”.

The decision to pull the plug was sudden, but Michaela insists this wasn’t a decision that was made lightly. “I feel there’s no really soft way to announce a bar’s closure. No matter how we announced it to the public I think it would look sudden, but it was definitely thought-out. There were many sleepless nights, definitely from me.”

About thirty staff bar staff, many of them students, will no longer be able to work at Starters. Affected staff “are being looked after,” with OUSA CEO Debbie Downs taking charge of those negotiations.

However, Michaela says OUSA remains “100%” committed to a student bar in North Dunedin, saying it is vital for harm reduction and looking after students. “It’s been a core part of Dunedin’s culture for a really long time, and everyone wants a place where they can hang out and drink and have a good time, without it being too expensive.”

OUSA are aiming for a replacement venue to be up and running by O-Week next year, says Michaela, but finding a suitable venue in North D will not be easy, and “time is ticking.”

David Bennett of advocacy group Save Dunedin Live Music called the closure a “heavy blow to the longevity and vibrancy of the Dunedin music scene”. He said the closure of Starters meant the loss of an important venue for student musicians and mid-level touring bands. "Many tours will have to cross Dunedin shows off their lists.”

Michaela acknowledged the importance of Starters as a live music venue, but said OUSA’s priorities in owning a bar are harm reduction and looking after students. “We’re not going to toil over finding the perfect bar. So if we found somewhere that’s suitable as a bar but doesn’t necessarily have that music aspect, would we consider it? I wouldn’t take anything off the table right now. Ideally we find a place that’s both a good bar and a music venue.”

“Maybe someone in the community knows a place we haven’t thought of. Or maybe one of our alumni will give us $60 million to build us a massive bar, who knows.”