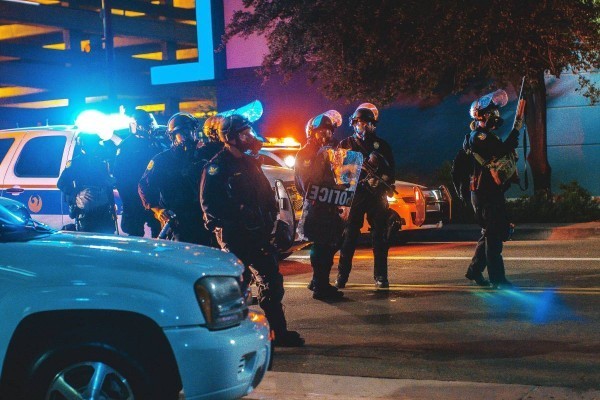 Suspect claims he heard about LEGO sale at Warehouse, “couldn’t miss it”

Students were excited and slightly concerned about a high speed police chase that went past the Business School on Tuesday 10 August at about 3.30pm. This makes it the second high speed chase down Union Street in just as many weeks.

Second year Sam* saw the chase first-hand. “We were just walking back from a lecture and we saw a police car with sirens, full on like chasing up the street and cars were pulling aside for them.” She said that the cop car was in pursuit of a black car, and that the pair sped past Fluid cafe and did a sort of “lap” around Clyde, Forth and Union Streets.

Reid overheard the interview with Sam and jumped in. “Yeah, I was right behind you, so I saw it too.” Reid said that the first thing he saw was two cars “going the same way in both lanes of the street, and I was like ‘huh, that’s weird,’ and then I noticed how much faster the black one was going. And it kinda ducked in front of the other one. And then I noticed the sirens.”

Reid said that he realized it was a chase when he heard the sirens. “I was like ‘oh shit, this is a police chase, this shit goes hard,’ I was hella stoked.” Reid said he’d seen a chase before, but only once, when he was 12. “I’ve never seen one in Dunedin, that’s for sure. I’ve barely even seen a cop car with the lights on.” Reid was shocked but curious. “We were thinking: what did someone have to do to have to run away from the cops, y’know?”

Third-year Robert Lazarre* also saw the chase. “Must’ve been drugs. He must’ve had weed in his car, like, a stupid amount. It was a nice car, as well. An SUV.” Opinions differed on the make and model of the car, even though all three witnesses saw the exact same thing. Sam told Critic that when the black car rounded the Union Street corner, it was going so fast that it was on a lean. “This was at like 3:30, so just 15, 20 minutes later that intersection would’ve been packed.” “It was very reckless, yeah,” agreed Robert.

Police informed Critic that officers “signalled a driver to stop at 3.40pm, as the driver is forbidden to drive.” The resulting chase occurred when “the driver failed to stop for police and continued driving. Police will be making follow-up enquiries to locate and speak to the driver.” Reid said that although the police were only about 20 metres behind, they seemed to lose the car. “I saw the police get to the intersection and they just didn't know which way to go and they kinda just slowly went left. Then five minutes later I saw another police car with no lights on just cruising.”

The Police spokesperson was unable to verify accounts made by Kaeli of a similar chase “about a week or two ago,” in which a ute was chased by a police vehicle down Union Street towards the stadium. Kaeli told Critic that both vehicles drove straight over a pedestrian crossing triangle and continued the chase onto Anzac Ave. Nobody seemed to be hurt.