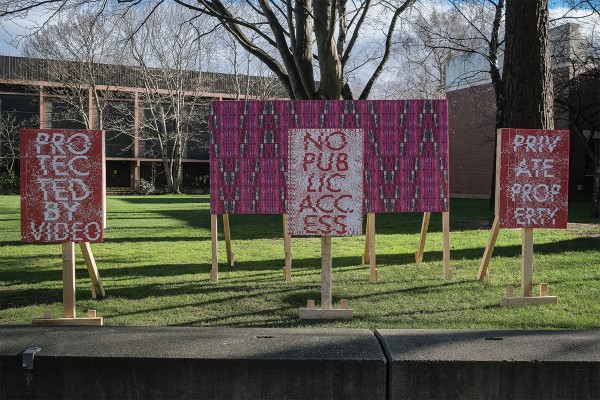 Signs popped up around campus, confusing and intriguing students

If you’ve been walking around Uni in the last week you might have noticed the plywood signs placed on the Union Lawn and outside the museum. Masters of Fine Art candidate Maggie Covell spoke to Critic about her project, saying that the installation centres on mental health and body autonomy issues connected to individuals who identify as female within NZ society.

Called Hidden in Plain Sight, three separate installations were assembled around areas with high foot traffic including Logan Park, the Museum Reserve, and the Union Lawn. She also said that “these works will function as creative interventions that aim to facilitate discussion and other interpersonal actions.

Critic camped out near the installation to have a chat to students walking past, with many noting that it caught the eye and was enough to make them stop and have a deeper look. One student said that the signage was “extremely reminiscent of studying George Orwell’s 1984” while another said that looking at it in detail “really hammered home the issues that women face in today’s society.”

A smaller sign next to the installations contained information for mental health hotlines and a QR code leading to Covell’s website where she lays out the entire months-long process for developing the artwork as well as future plans for her artwork.

While part of the installation on the Museum Reserve was vandalised last week, it was quickly put back up, with Covell telling Critic Te Arohi that “I’m not angry, just disappointed.” The locations of the artwork will change soon in an upcoming second phase, moving to sites in Mornington, Bayfield and South Dunedin in an attempt to capture a wider audience from across the city.

Covell also told Critic that the project won’t stop there, as she has free public workshops planned (in association with the Dunedin Dream Brokerage) where participants will contribute to another public art installation. She also said that a performance installation is in the works for next year as a follow-up. The artwork will remain on campus until 22 August.