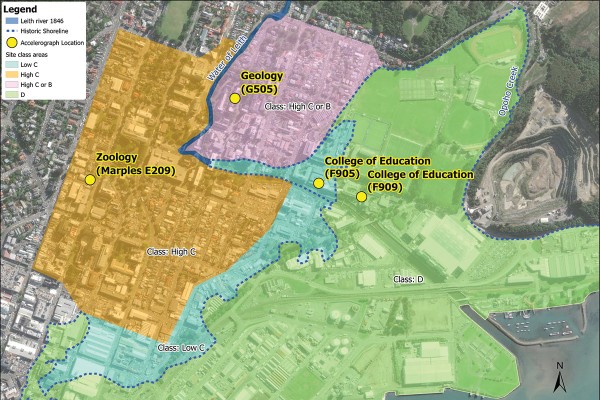 You can see one of these new stations in the Geology department’s “Earthquake Alley” through a glass panel in the floor. The accelerograph is visible in a black box, as well as three older weak motion sensors, which record regional and distant earthquakes.

Not all ground is created equal. Dunedin has four different types of ground, each of which would shake differently in an earthquake. This has implications for the shaking of buildings depending on the ground they are built on. Four stations have been installed accordingly. One is in the geology building, on top of solid, volcanic rock. One is in the Zoology building, built on solid gravels. The final two are in the College of Education, which is on reclaimed land and soft sands. These ground types will shake differently, and having a station on each type will tell first responders which buildings in Dunedin have been hardest hit.

In the event of a major earthquake, first responders need to prioritize the buildings that have been hardest hit. Without this new network, that decision wouldn’t be much more than an educated guess. But now, first responders have access to real-time data and can plan accordingly.

Professor Mark Stirling, Chair of Earthquake Science at Otago, told Critic that the new system will “help relevant groups, such as emergency services, prioritise which buildings need the most urgent attention, and which buildings are safe enough to use as temporary storage.”