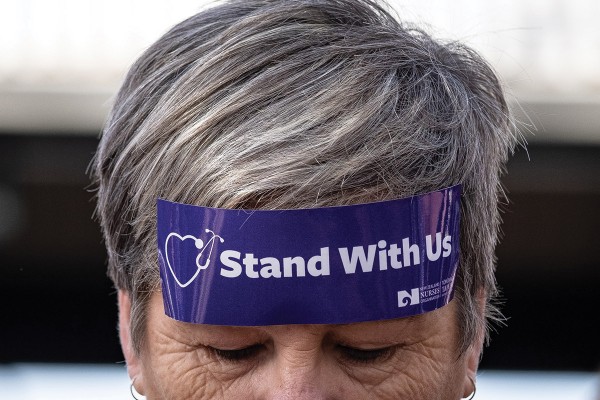 Why nurses are continuing to strike

The New Zealand Nurses Organisation (NZNO) is planning a strike for 19 August after it rejected the government’s latest pay offer.

According to NZNO’s Lead Advocate David Wait, “while the DHBs [District Health Boards] had made promising moves on pay, the offer contained too many ambiguities,” especially around safe staffing provisions. He said that nurses have previously been burned by empty promises to ensure safe staffing levels. The next strike, the second of three planned, is set to go ahead for eight hours nationwide on 19 August unless talks are resumed. The following strikes are set down for 9 and 10 September.

The Minister responded to the resumed strike notice by putting out a press release stating that “the Nurses Organisation rejected their own proposal.”

This was immediately slammed by health commentator Ian Powell, former Executive Director of The Association of Salaried Medical Specialists. He said that “nothing could be further from the truth” than Andrew Little’s statement and “one would have also thought that he wouldn’t publicly misrepresent the position of the union representing nurses”, considering that Andrew Little was once a prominent union negotiator, which is some premium shade.

“It’s a bit disingenuous to suggest it was our proposal, because that’s not how bargaining works,” said Glenda Alexander, NZNO’s Industrial Services Manager, regarding Little’s press statement. “It is false, it is not correct, it is not a true reflection of the circumstances.”

This industrial action is about more than just pay — it’s about working conditions and health and safety as well.

NZNO Union Delegate Anne Daniels, a long-serving emergency department (ED) nurse, told Critic Te Arohi “we're put in a position where, professionally and ethically, it breaks our hearts knowing that we can't deliver the care that we're supposed to. It worries us every day when we go home, knowing that there’s stuff that we should have been able to do but we couldn't, because we don't have the time and the resources.”

Frances Weaver is a healthcare aide. Perpetual understaffing and an ever-increasing list of tasks and responsibilities means that aides don’t have time to take their breaks, let alone adequately look after patients. She said that the hospital cleaners, as well as rest home careworkers, are now paid $3 more per hour than healthcare aides employed by the DHBs.

“We have to look after patients that have mental problems, that self-harm and are suicidal. We're not trained in that area. They’re supposed to send aides from mental health to look after these patients but they don’t. So we have to do it. [When] someone's violent, and you ring the bell, it can take ages for somebody to come. It's dangerous on your own, when you're looking after these patients and they’re violent. You just have to go out of the room and shut the door because there’s nothing you can do if they’re trying to hit you. The other day, they made us go and have self-defence lessons, so if we get strangled or put in a headlock or something, we know how to get out of it,” said Frances.

“I personally know a few of my friends who are registered nurses who worked up in Wakari, that were both on ACC for long times — due to concussion, and one due to PTSD,” said Sara Phillips, a student nurse.

Anne said many young nurses are making a pragmatic decision to jump the ditch because Australian states have mandated safe staffing levels, and clearer guidelines for accountability and responsibility, not to mention far better pay and more affordable housing. “There is no comparison. Except for the fact you have to leave your family and New Zealand,” Anne said.

Sara is in her third year of study and on track to graduate in December. She agreed with Anne. “You do get better pay and the weather's nicer. I don't know Australian shift work, but it seems to be a lot nicer. Here, you get what you're given, and you suck it up. It's not really a [good] quality of life.” She said if it wasn’t for her relationship with her partner keeping her in New Zealand, “I would 100% go straight overseas.”

New and veteran nurses moving to Australia en masse means even bigger problems if steps aren’t taken soon to make nursing in Aotearoa a more attractive prospect. “It's just going to get worse because the population’s getting bigger and people are living a lot longer,” Frances said.

Sara agreed that the condition of New Zealand’s nursing workforce is in a precarious state. Instructors have a tendency to “skim over information” and then to send students away to do deep learning on their own, she said. “I know some of my other student cohort have struggled because they haven't done that background research themselves. We're in year three of nurse training, and some of them still can't do CPR correctly. That, to me, is petrifying, because we're now going to be let loose in the public arena.”

This view was echoed by Frances, who lamented the under-training of young healthcare workers. “It’s a health and safety thing. It’s serious.”

Anne’s message to students is “come and stand beside us” when they go out on strike. Frances said “if we’re not safe, the patients aren’t safe, because we can’t give out the proper care that they need.” Her message to the Ministry of Health is to “show some respect to your staff and actually employ some more staff — both nurses and hospital aides.”

“I'm really hoping that something can change,” said Sara. She went into nursing because her cousin had terminal cancer, and the nurses in the hospice “were absolute idols, like the type of people I want my children to look up to when I'm older.” However, the gruelling training and conditions for graduated nurses has made her reconsider her decision at times, especially when offered better paid opportunities in other industries.

“I'm trying to hold on [to my passion for nursing] for as long as possible,” she said. But with the current policy settings, things don’t look optimistic.

Students can write to Minister for Health Andrew Little, or sign the petitions on the NZNO’s website.