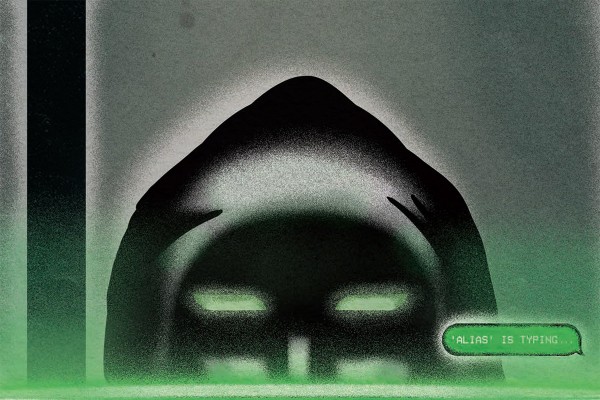 A note on aliases: Members of Action Zealandia use aliases to obscure their identities, even from other group members. In the article aliases are signalled by the use of single quote marks the first time a name is mentioned, e.g. ‘Marc’.

A neo-Nazi group is attempting to become more active in Dunedin and recruit more members across Aotearoa.

Critic Te Arohi’s undercover investigation into Action Zealandia, the largest white supremacist group in Aotearoa, revealed information including the organisation’s recent activities, internal membership structure, links to other neo-Nazi groups, and strategic plans for the future. The group has been active for just over two years.

This week, in an attempt to claim August 9 as “White Lives Matter Day”, the group’s leadership demanded that all of their chapters do banner drops and poster runs in the days leading up to August 9.

Action Zealandia members attempted to plaster “White Lives Matter” and “Kyle Rittenhouse Was Right” posters in the Dunedin City Centre in June, but fled the area after they were approached by members of the public. (Kyle Rittenhouse was a 17-year-old charged with shooting and killing two protestors at a Black Lives Matter protest in Wisconsin in 2020). Action Zealandia do not currently have a Dunedin presence — but they have in the past, and they want to become more active in the city.

The group have put up banners across the country this year, and Critic witnessed a banner-drop over the Newlands Road overpass over State Highway One in Wellington. The banner read “Boer Lives Matter - Action Zealandia”, referring to the belief that white South African farmers, known as Boers, are being systematically murdered by black South Africans, a prevalent conspiracy theory in white nationalist circles. The banner, roughly 1m by 2m in size, was tied with zip-ties in a prominent position over the highway, but it was quickly taken down by local anti-fascist activists. A similar banner in Pōkeno, South of Auckland, was taken down by local anti-fascist activists around the same time.

The organisation restrict their membership to “physically fit, tidy European male[s] of sound mind and good character.” It currently consists of 30 active members. There are an estimated further eight “supporters”, at least three of whom are women. The average age of their members is roughly 25, according to group leaders. Their leader claims there are a significant number of university students in the organisation.

The leader of the group is James Fairburn, a former army communications operator who left the army reserves late last year after his links to Action Zealandia were made public in a Newsroom article. Information obtained by Critic Te Arohi in March showed that ‘Hector’, Fairburn’s online alias, is listed as Movement Leader. Discussions in online chat-rooms confirm that he is the group’s leader.

‘Matt’, who made headlines after Newsroom reported he had planned a terror cell in New Zealand, remains in Action Zealandia. ‘Johann Wolfe’, the alias used by a soldier charged with sharing sensitive military information and threatening New Zealand's security, was present in Action Zealandia chats. He expressed admiration for the Christchurch mosque shooter. As reported last year, he is the first New Zealander to be charged with espionage. Although his involvement with the Dominion Movement has also been reported, his presence in Action Zealandia was not known until now.

Another member, ‘Ivan’ discussed his role in the army in the chats. ‘Rick Bulger’ bragged about having a job which involves access to government agencies and data. He writes articles for Action Zealandia’s website under another alias.

The leader of the Wellington chapter, ‘Will’, discussed being a current student at Victoria University and studying music. Their oldest member, ‘Dave’, is 42. He is a holdover from the Dominion Movement, a dissolved white supremacist group.

The group fluctuate in how active and bold they are. They face significant setbacks when group members are arrested or their social media accounts become deplatformed, but there appears to be an overall increase in their activity over time.

On at least two occasions, their leader James Fairburn, under the alias ‘Hector’, temporarily left Action Zealandia communication channels after being arrested and his devices confiscated. In April he said in chats that he was “caught by the cops during a street action” and for “breaching bail after leaving his residence”, after originally getting arrested for vandalism.

In late April, Fairburn (as Hector) announced to other Action Zealandia members that he would be flying to Australia and would try and meet up with Thomas Sewell. Sewell is a leader of the National Socialist Network, an Australian neo-Nazi group raided by police several times this year. Fairburn announced at the time that Sewell would be an upcoming guest on the Action Zealandia podcast.

Fairburn was apparently stopped by authorities at the border attempting to travel to Australia and, as a result, was kicked out by other senior executive Action Zealandia members. Thomas Sewell was arrested a week later by counter-terrorism police for a violent armed robbery in Melbourne. The podcast featuring Thomas Sewell was either never recorded or never released. Fairburn returned to the group and was reinstated as leader shortly after senior members were confident his devices weren’t compromised.

Action Zealandia were banned from Twitter and Youtube in June, after the government-led counter-terrorism hui in Christchurch brought attention to their social media accounts. They continue to use a range of apps including Discord, Gab, and Odyssee, but primarily function in private chat rooms on the encrypted messaging apps Telegram and Element.

Action Zealandia have spread misinformation and fear about Covid-19 vaccinations. One member said they were “starting to believe it aligns in a depopulation agenda,” linking the vaccine to prominent white genocide conspiracy theories and echoing the idea that Jewish people developed the vaccine to sterilise and depopulate the world. That idea was pushed by a guest on their podcast in early July. Members pressured other members to not get vaccinated, and discussed ways to avoid getting the vaccine if their workplaces mandated it, including falsifying vaccine documents.

Within their private chats, Action Zealandia members praised historical fascists, including Hitler, and discussed the varying philosophies of modern fascists. They engaged in holocaust denial on multiple occasions. They promoted the white genocide conspiracy theory that a Jewish elite are plotting the extinction of white people through mass immigration, forced diversity, multiculturalism, and abortion. They expressed their beliefs that people of colour and LGBTQ+ people are tools to reach this goal.

In their chats, members frequently denigrated black people, Māori, queer people, leftists, fat people and drug users. Members have celebrated violence against many of these groups. Discussing protests around the murder of George Floyd, they said “people like him [Floyd] deserve a bullet in the back of the head” and repeatedly referred to him using the n-word. Joking about creating their own version of the song “Come Out, Ye Black and Tans,” a member wrote “come out you blacks and trans come out and fight me like a man.” They talked about how “gratifying” a video of leftist activists getting beaten up was, and shared memes about killing the three black players on the English football team who missed penalties in the European Championship final.

In online chats and physical meetings, members discussed the group’s desire to create a “pure” white ethnostate in New Zealand.

Members also defended the actions of the Christchurch mosque shooter. “No wonder someone finally snapped after all that they [Muslims] have done to us!” one member said in an encrypted message, with others agreeing, saying “after decades of Muslim atrocities in our homelands I don't feel bad about what happened,” “I'm not a violent person, but when it comes to it, fuck them,” and “The only problem was that [the shooter] didn't go after those causing the real problems. Was dumb attacking innocent muslims where there are soooo many guilty ones…” [sic]

In the past month, members discussed combatting the hate speech laws proposed by the government by creating an organisation without any public connection to Action Zealandia. Their aim is to drum up opposition to hate speech laws across the country and pressure the government to make various amendments to the proposed laws. They believed they could capitalise on the frustrations farmers hold towards the government. They proposed names for the front organisation including “Yeoman NZ” and “Country Alliance”. Action Zealandia members have made multiple online submissions to the Ministry of Justice on these laws.

Several members also debated infiltrating and “reinventing” the National Party to spread white supremacist ideas to a greater portion of the population.

A strategy document circulated to members in July reiterated these plans and outlines several others. The document prioritises working on a new approach to spreading their message, with new platforms and multiple different websites to appeal to a broader audience. They want to encourage further audience and supporter participation. Reiterating plans for political infiltration, the document stipulated concentrating on “weak” electorates first and training specifically chosen people for these roles. The strategy document outlined plans for the group to have yearly meetings in January, December, and over ANZAC weekends.

The document also provides directions for minors attempting to join Action Zealandia. “If applicant is too young, do not turn them away totally. Ensure you give them a list of directions of what they can do to help spread our message - mainly amongst their friends at school. Think about how we can make the youth help before they're old enough to join.” Previously, the leader of the Wellington chapter claimed teenagers as young as 13 had reached out to join.

On their public podcast, as well as in their private chats, Action Zealandia are openly fascist. While they deny being a neo-Nazi organisation, they consistently support racist, fascist, and neo-Nazi ideas, leaders, and groups, both locally and internationally. Kerry Bolton, former secretary of the white nationalist group National Front in the 2000s, is a frequent collaborator online and in person, as is former National Front community organiser Chris McCabe. Many prominent overseas neo-Nazis are cited and praised by Action Zealandia in their podcasts, private chats, and physical meetings.

In other chats and communications, founding members of Action Zealandia cite the Nordic Resistance Movement as a key influence. Other extremist groups and individuals interviewed on the podcast include: the New British Union, a British Fascist political movement; Blair Cottrell, a prominent Australian neo-Nazi convicted of numerous charges including inciting hatred against communities; and Rob Rundo, the founder of a violent Californian ‘alt-right fight club’ known as the Rise Above Movement. Members of the Rise Above were arrested for their involvement in the deadly Charlottesville riots. Rundo was on the run from US officials in Bosnia when Action Zealandia interviewed him.

Action Zealandia coordinated with a number of these international groups when making their posters and banners, including their “Boer Lives Matter”, “White Lives Matter”, and “Kyle Rittenhouse Was Right” campaigns. Most of these campaigns are organised by the International Conservative Community (ICC), a transnational network of fascist groups founded by Rob Rundo. Action Zealandia functions as the New Zealand arm of the ICC, and there are other arms across North America, Europe, and Australia.

Action Zealandia has previously appeared in the news for vandalising the Auckland office of two National MPs, and for the actions of some of its members. Sam Brittenden, a former member and former University of Otago student, was arrested last year after refusing to hand over his phone under a police search warrant. He was convicted the year prior for disorderly conduct after shouting "fuck the Muslims" on Castle Street the day after the attacks.

This investigation was made possible with assistance from anti-fascist research group Paparoa.