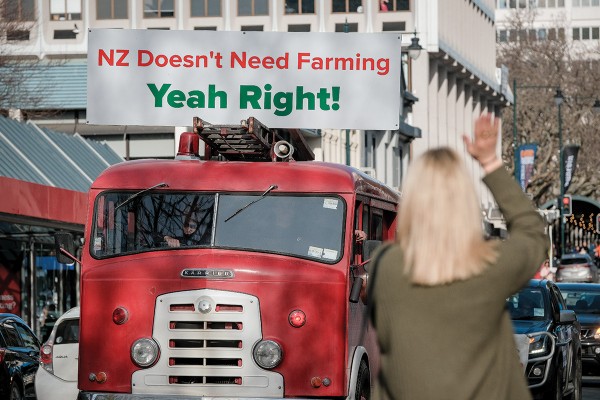 Farmers Really Wanted Students To Care About Their Protest

I, for one, have always welcomed our farming overlords

Nearly 700 tractors, utes and four-wheel drives passed through the heart of Studentville two weeks ago, participating in Aotearoa’s largest farmer-led protest — and those behind the wheels had many hot-takes to offer to a mostly oblivious student community.

Students accosted on George Street seemed to have little idea about just what the hell was going on. Only two of the ten or so individuals whose conversations we interrupted had any clue about why tractors were rumbling past them — “some sort of farmers protest, I think.”

Few had any opinion on the protest, apart from Yanik, who said: “I do think more regulations from government is quite important. The land is crying bro. The land is not happy.” He is an ecology student, by the way, if you didn’t already figure that out.

Demonstrators we spoke to in the Octagon, while overwhelmingly Pākehā and middle-aged, were insistent that the “Howl of a Protest” was relevant to students. Maria said: “Students are great, but you can’t live off the University. Who got us through Covid?” Not public health experts at the University, apparently.

Another protester tried to explain farmers’ grievances using a metaphor that every student can relate to, home ownership: “They believe their rights have been taken off them. If you were a student and you bought a house, and the Government said ‘You don’t own the rights to that house anymore,’ what would you say?” Here’s a tip to get down with the youths, mate: Replace “house” with “bong,” and “Government” with “Proctor”.

Keen to hear from farmers themselves, rather than farming-adjacent individuals, Critic Te Arohi’s intrepid reporters braved life and limb, stepping out into (gridlocked) traffic to ask what they had to say to the students they were driving past. Here are a selection of hot takes from their double-cab utes:

Most ominously, Dave, a farmer in the passenger seat of a Hilux emblazoned with the rather confusing slogan “James Shaw run with scissors,” told Critic Te Arohi: “History shows you. If you don’t make laws that work, people rebel.” The ute in front was playing Twisted Sister’s “We’re Not Gonna Take It”, on repeat.