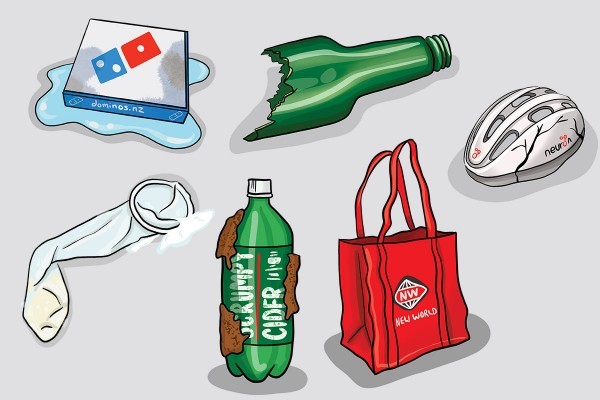 No Fines for Lawn Litter

It’s gross, but the Uni can’t fine you for it

A proposed change to the Code of Conduct would have made it possible for the Uni to fine you for having a littered front lawn. The University didn’t go through with that change after receiving negative feedback from students, releasing their response on 10 July.

Ultimately, the University decided to let students “do the right thing” while acknowledging that “appropriate action is still needed to deal with gross rubbish dumping on private land.” And they’re not wrong. But that doesn’t mean they should be the ones to fine you for it.

Having litter in the front lawn was seen as “gross”, and something that reflected negatively on the University itself. A “gross” front lawn was one that had “a negative visual impact on others.” Lawns meeting this criterion would enable the Proctor to issue a “Notice to Clear Rubbish” and potentially a fine.

Students joined arms to retort that fining students for this was an overstep of the University’s power. There were 90 pages of responses to the new Code of Conduct. Almost all of them were about rubbish.

Students claimed that “what we do on our property is of no concern to the University”, and that “the ability to fine students should be reserved for much more serious and much less public offences.” One student response reminded the Uni that many dirty flats are not responsible for their front lawn litter, that much of it is thrown into the lawn by passersby. Another response signed off with the declaration that “we will fight this in court ’till the bitter end.”

A particularly astute response demonstrated that the wording of the new rule was vague enough to be used in several inappropriate situations. They noted that under this new rule, students could be fined $500 for litter on a property kilometers from campus, litter on a property shared with non-students, litter that is present with consent from their landlord, or even litter left out while the student is home on break. “Why are we actually doing this,” asked another.

A further response retorted that if this was anyone’s job, it was the City Council’s. “You charge us like full-price adults,” said one particularly terse submission, “but seek to wield influence that infantilizes the student cohort. Reconsider.” This was echoed by staff who believe that “students should not have to adhere to a higher standard than ordinary citizens” when it comes to rubbish. “Unless, of course, they’re UniFlats.”

Not all staff were on board, though. One was disgusted by the student area, and said that while chatting to two “tourists” recently, they were asked what kind of “riot” had happened here. Honestly, it’s the tourists’ fault for trying to have a holiday in North Dunedin. The “rubbish, broken glass and vomit” were all reasons to “finally implement” a liquor ban in student areas, argued the staff member. This is not even remotely in the realm of University legislation.

Finally, a rule against the breaking of glass bottles in public spaces be part of the Code of Conduct. The University also recognized that the efficacy of drug and alcohol screenings may dip if made mandatory, and instead recommended that these measures were encouraged, not required.

One submission concluded that “the University must remember that … separation is crucial in maintaining a positive relationship between itself and the people it is in place to serve: the students.” To which the students said “We’re quite happy with our filth, thank you.”