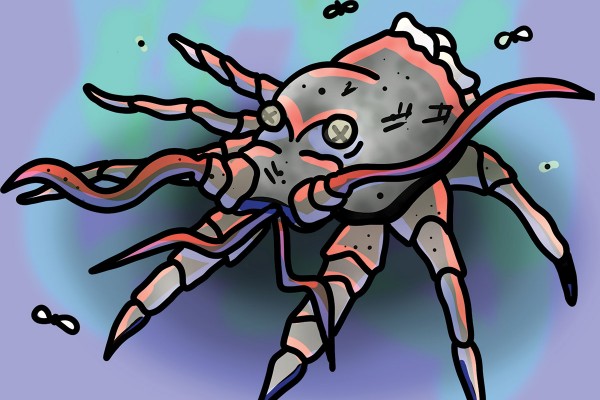 There Is A Decomposing Lobster on Great King Street

Be afraid, be very afraid

Around three weeks ago, a lobster appeared on Great King Street.

Annabelle, a resident of Great King Street, was leaving her flat one morning when she started smelling “the salty sea air”. “I thought it was odd because you usually smell either exhaust or Maccas,” she said. “I looked down and I saw a lobster, but in half.”

There was a head, and then a metre further away was the body. A few days later, Annabelle was on her merry way when she looked up and saw that the lobster head had moved onto a fence.

“I think it’s haunted. It maybe moved itself. It was perched there, and its little antennas were hanging out, and it looked like it was staring at you.”

The lobster has since kept moving around Great King Street, its two halves always within the same ten metre radius between Pizza Hut and The Baaa. Sometimes it’s on the street, sometimes on a wheelie bin, sometimes on a fence. There have been three rubbish collections since then, yet the lobster persists.

The lobster’s origins are a mystery. Fatty Lane is primarily a student area, yet lobster and crayfish go for $120.00 on average, which is very expensive for a student to purchase and not eat.

No breatha has drunkenly squished it or taken it home. Nobody has cleaned it up. It has not appeared on Dunedin News. Critic has received upwards of six Snapchats of it over the last two weeks. However, Annabelle believes the lobster may only be visible to certain people.

“I have a lot of enemies and I think the lobster is a metaphor,” Annabelle said. “Or a signal. A bad omen. The most disturbing thing is that it’s in two halves.” She described it as “really disturbing” and said she “just wants to get rid of it.”

“I have a connection to it, but it also scares me,” she said. “Just like men.”

The body has reportedly disappeared in the last week, although the head remains. It also may or may not actually be a crayfish. Forensics will be required for further investigation.

When asked for his thoughts about the lobster, Critic Features Editor Elliot Weir said: “Oh wow I love that movie.”