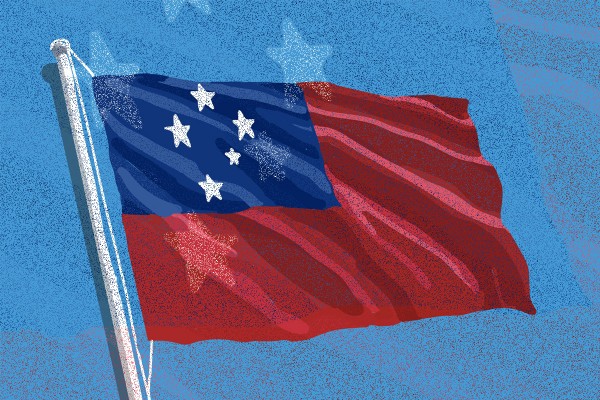 Samoan Students On Why Their Country is Ready for Change

“We need change and Vaaletoa needs a break” – Davina

The Samoan election was in a deadlock between a new opposition party, FAST, and the current governing party, HRPP. Another seat was added to break the deadlock, but it’s not clear whether that was legal, and the Head of State has recently called for a fresh election, but it’s not clear whether that was legal either. The current ruling party has been in power for nearly 40 years, and they’ve had the same leader, Tuilaepa Lupesoliai Neioti Aiono Sailele Malielegao, for the past 20 years. His deputy prime-minister, Fiame Naomi Mata’afa, split from the party and formed FAST last year. FAST are the first major challenge to HRPP’s power in decades.

“It’s very long, it’s dragged on for a while,” said Davina Suaalii, who is a first year health science student. She’s not old enough to vote, because the voting age in Samoa is 21, but she’s started paying attention to politics more in the past few years. “At first it was really intense, a new party and an old party, and it was like ooh, who’s going to win? Now it’s like ugh, is this still going?” she said.

“I think it’s a good thing to have a new party in power. Samoa needs change, the world is changing and they need to change and adapt to the rest of the world,” she said. “Tuilaepa is going to go down in history as someone great, but if he continues with this, maybe not.”

Latu Kioa, who is studying his PhD in theology at Otago, said that FAST rose to power when the government started to interfere with customary land rights. “The current government were touching the very core of our culture, which is land, customary land”, he said. “They have allowed 80% of customary land to be leased out to foreign investors, but these lands are owned by our family. Our chiefs, our matai, are caretakers. Every Samoan, we all have rights to that land.” The land issue, Latu said, was the reason FAST was formed.

Latu explained that FAST have run on a grassroots platform, rather than focusing on the urban centres like Apia. By having a woman as their leader, they respect Samoa’s bilineal tradition, he said. FAST are also campaigning to give the vote to Samoans living overseas, so it’s maybe not surprising that these students in New Zealand supported them.

Livingstone Efu, a law student, said that it was “really good to see Samoa grow its democracy through this election. We can finally see that there is a chance, the HRPP they’re not dominant, there is a possibility of another party taking over.”

“On the election day I spoke to my mum and dad, but it’s not like you wake up and announce who you’re going to vote for,” Livingstone said. “That’s the funny thing about Samoa, you can come from a family of like ten people and you won’t say who you vote for. You have people who vote for FAST and people who vote for HRPP in the same family.”

Latu wanted to emphasise that everything they say about HRPP and Tuilaepa is with respect. “They’re our fathers, they’re our mothers, and we maintain that respect and that space. This is our own personal opinion with what’s going on,” he said. Livingstone said: “It’s not in a respect ‘North Korea’ kind of way. We actually respect our leaders.”