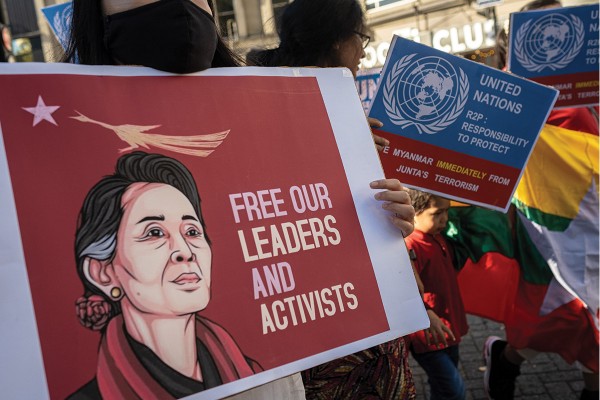 In other words, the University actually responded to student opinion

The University initially refused to allow an on-campus food fundraiser for activists in Myanmar, but reversed its decision after a “strongly-worded email” from OUSA President Michaela Waite-Harvey.

The fundraising Burmese students were shocked when Property Services said their food stall could not operate within University grounds because it would “interfere too much with commercial outlets who pay to be on campus”.

The students reached out to OUSA, who then got in touch with Property Services about the fundraising ban. “This was an example of an unfair and outdated policy and I am very thankful for how quickly property services have worked with us to not only approve a fundraising food stall for the Burmese students but also that we have now committed to sit down and review the policy to allow more students to fundraise outside the union building,” said Michaela.

Campus and Collegiate Life Services Director James Lindsay said that “the Myanmar democracy fund-raiser stall has now been approved after the Otago University Students’ Association president asked us to reconsider our standard approach because of the exceptional circumstances affecting our students from Myanmar.” He also said that the University is currently reviewing its general policy and considering allowing more fundraisers on campus.

Michaela said that “as OUSA had endorsed the protest earlier this year we have also committed ourselves to help anyway we can.” The fundraiser will now take place on 15 April.

For one of the people hoping to raise funds, third-year microbiology student Hay, the Myanmar crisis is personal. As an international student, she is considered a threat by the military regime, risking arrest if she tries to return. Her own family are on the run, forced to abandon their family home. Though she’s thousands of miles away, that doesn’t stop her, and many other Burmese students, from taking action.

One of these planned events was a fundraising stall on campus, selling food and helping to raise awareness for the crisis. To set up their stall, they needed to talk to the University’s Property Services division, who manage campus grounds. They sent an email, and after “about a week,” they responded with an e-mail saying:

“We appreciate your efforts to raise funds for such an important cause. However, selling food on Campus grounds interferes too much with our commercial outlets who pay to be on campus. Unfortunately, for this reason, we cannot approve your request to use University grounds to fundraise for this cause. We would like to wish you the best, and if there is anything more I can help with, please do not hesitate to call.”

While private food trucks do operate around campus, all outlets within University buildings (i.e. cafes, the food court and the Campus Shop) are owned and operated by the University. “The reason for traditionally declining requests is because they compete with commercial outlets on campus that pay rent/a licence fee for the right to trade on campus and have other costs, including staff,” said James Lindsay, but they are reconsidering this reason during the review of the fundraising policy.

Hay was astounded. “I understand if it’s Union Lawn, there are lots of food trucks usually there, but we can’t go to any other places.” Especially gutting was their offer of “anything more I can help with”. “This was the help we needed!” Hay said.

At $5.50 per boxed meal, the activists had hoped to raise $1,000. This would go to local organisations, helping people who have been “driven out from their lifetime homes for participating in the civil disobedience movement”.

“They are currently living on the roads, with no home, no shelter, no food,” Hay says. She estimates those funds can provide living and medical costs for 30 households - in other words, with at least 3-5 people per household, almost 100 or more.

“It’s just a one day thing, just from 11-2… We have a limited capacity to make food, it’s not going to be the same amount the commercial operators are doing. It’s small-scale - that’s why we’re shocked.”

Protesters supporting the overthrown, democratically-elected government have been shot on the streets. On Saturday alone (Armed Forces Day in Myanmar), over 100 were killed, including children as young as 5 years old.

The rejection left the group scrambling to find another location, reaching out to the Polytechnic, the Dunedin City Council and even the Dunedin News Facebook page. For Hay, time was of the essence: “If we delay this, the [money] transfer is going to take some more time. It’s getting worse day by day… Every minute counts.”

The Myanmar Food Drive will take place on the 15 April on Union Lawn from 11am – 2pm. You can buy fried rice or curry for $5.