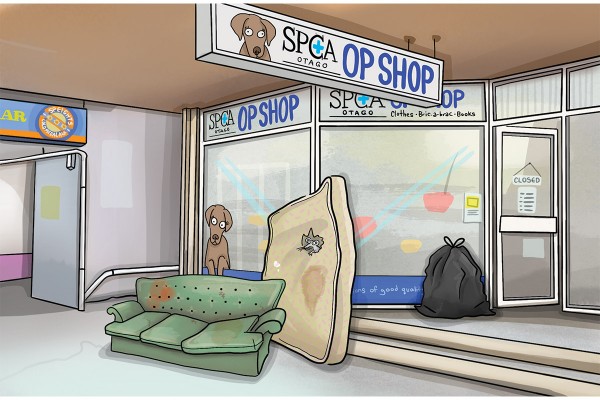 Critic joins the ODT in their headlines about dumping

The manager of an op-shop has accused landlords of using their shop to dump waste, but the head of the Otago Property Investors’ Association (OPIA) said students are mainly to blame.

April Topi-Elliot, who has managed the SPCA Op-Shop in North East Valley since it opened 5 years ago, told Radio One that “a lot of waste actually comes from landlords,” noting that after students leave at the end of every year “they go and clean up … But they just gather the waste and leave it outside our door in big black bags.”

While April used to work with the Dunedin City Council (DCC) and landlords with student clean-ups, she’s stopped doing that, saying “landlords were going in and stripping their flats, putting in new carpet or ripping out walls and putting them in the skip.”

In an interview with Radio One, Katherine Seque, the head of the OPIA, said “I have not heard of any landlords dumping products at op shops, and it’s very disheartening to us to think that landlords may be burdening the charity shops when they do such a great job.”

While not denying that this could be happening, saying “there are bad landlords just like there are bad tenants,” Seque thought students were to blame too. She said, “Just remember it’s not landlords and property managers ... putting a couch outside to sit on in the summer and then realising it's wet and mouldy now in the winter, and then dumping it on the street.”

She emphasised that “tenants need to make sure their stuff is disposed of before leaving their rental properties. If there is stuff left behind, then the landlord needs to photograph it, dispose of it correctly themselves and pass those costs onto the tenant that left it there.”

A DCC spokesperson said: “The extra kerbside collection services are well used by tenants living in the tertiary precinct, although it can be difficult to determine exactly where rubbish or recycling placed on the street comes from.”

“Rubbish or recycling placed at kerbside that does not meet the DCC’s collection criteria is treated as illegal dumping. Where the offender can be identified, we issue a warning along with educational material on available waste and recycling services.” Offenders can be fined between $100 and $400 for dumping rubbish.