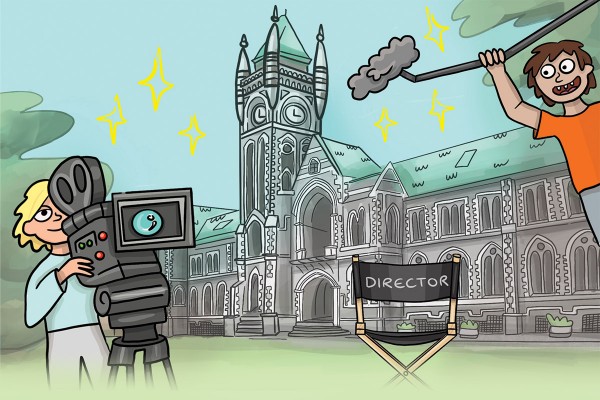 Mysterious Movie Being Made on Campus

Critic’s advances shut down, despite generous offers of bath salts

There’s a movie being filmed on campus.

Critic reached out to the Netflix production team of The Royal Treatment, who were unable to provide comment on their closed set.

Students saw a crew filming what appeared to be a market scene outside of Geology, complete with old-timey cars and stands of fruit. Also sighted was a night-time shot on Leith Street, near the Geology building and Clocktower.

With this very limited information, it’s time for wild speculation.

We bet it’s another Lord of the Rings, set in Dunedin. Mount Cargill recast as Mount Doom. A shameless cash-grab on an already exhausted franchise.

Or maybe it’s a Harlene Hayne biopic, starring Harlene as Harlene. Perhaps it’s a sort of Hannah Montana/Miley Cyrus type deal, with Harlene moonlighting as Dunedin rap icon Charlene Chainz. Trouble arises when she has to choose between performing a big show and attending a Sign Up Club BYO.

Maybe it's The Charlene Chainsaw Massacre, a gripping and revolting tale of dismemberment and debauchery set in the Castle Street slums.

It could be a wrap-up finale of the Truman Show style experiment they’ve been running on campus for the last 20 years. They’re about to set the titular breatha free of his North Dunedin film-set prison. He’ll be so excited to learn about the real world, and to see birds that aren’t seagulls.

Another possibility is a documentary on the life-cycle of couches in North Dunedin, following one from infancy to immolation. A mournful piece about a vanishing species.

It could even be a drama about the Bills, with human-duck interactions like in Alvin and the Chipmunks. Though a source told Critic they’re going to replace the ducks with CGI. Not cool.

Critic invited the starring actress and actor to a flat party, “to experience what North Dunedin really has to offer.” We have not received a response, but we would like everyone to know that Critic gets invited to parties.